Popeye the Sailor Kitty
by Jennifer 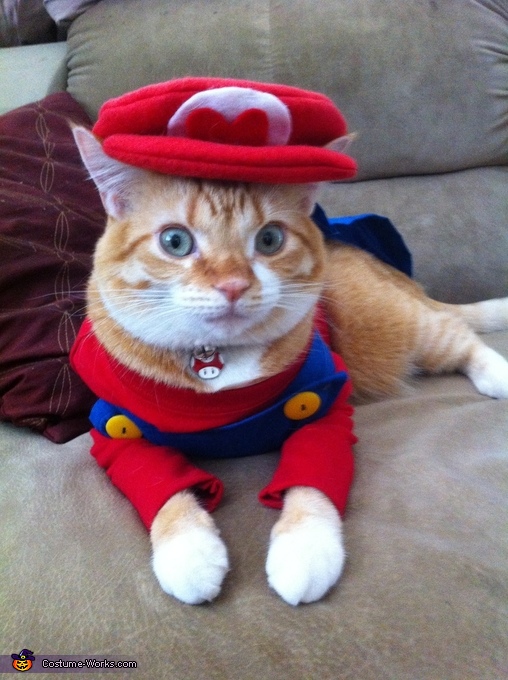 This homemade costume for pets entered our 2013 Halloween Costume Contest.

A word from Marcy, the 'Super Mario Cat' costume creator:

This Super Mario Cat costume is being worn by Mario. He was adopted less than a year ago and is my first cat. I was never a cat person, but I am so in love and utterly obsessed with my cat Mario, I even made him his own instagram @itsamemario_cat. The idea just came to me because of his name being Mario already it just seemed natural to dress him up as Super Mario :). I made the costume first with the overalls by purchasing blue fabric from the craft store and measured him length wise from his neck all the way under him to his chest. Then I measured his width and cut the fabric according to those to measurements with and extra inch on each side so I can use it to fold it over ans sew it. I then estimated where his tail hole should by measuring the fabric on him and then just cut a small hole and made it bigger if needed. With the left over fabric I made the overall straps about and inch thick and the length was tricky to get right so I had to move the buttons several times to figure out where it fit best. For the button holes I made a line the length of the button on the chest part of the overalls and sewed and thin rectangle around it by hand and then sliced through the line with an exacto knife. I used about 1 yard of fabric but purchased 2 just in case. For the shirt I purchased a red toddlers shirt but was too big so I sewed the sleeves and waist to make it smaller which worked perfectly. Lastly the hat I ordered from etsy and was made for his head size I also sewed straps on the hat but it made the hat fit weird so I just set the hat on his head and had to fix it constantly. Thank you for your interest :)