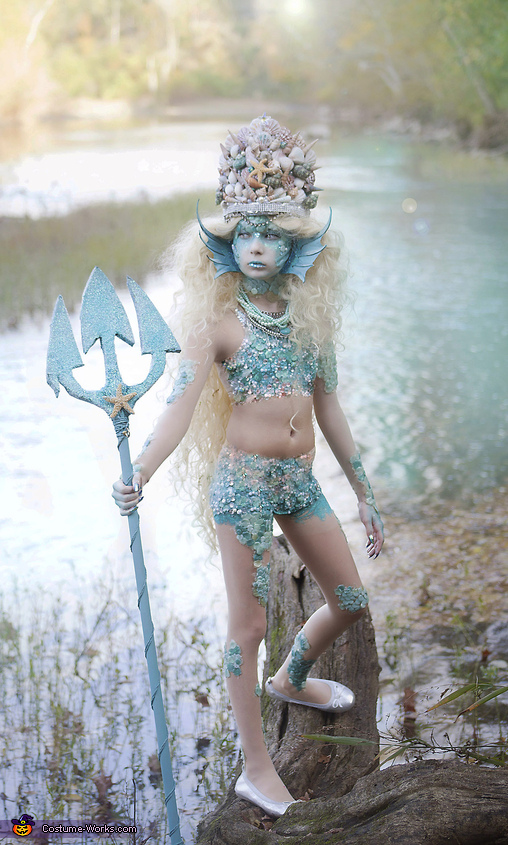 A word from Dyana, the 'Stunning Siren' costume creator:

My daughter wanted to be a creature this year for Halloween, but she still wanted to be beautiful and was leaning towards being a mermaid. So, we decided to be a little different...we would make her a siren!! She wanted to look like she was realistic and just coming out of the ocean. We debated between having a tail or her legs growing scales and ultimately decided on the legs. We thought it was more realistic and also because it would be more comfortable to wear when trick or treating ;) We created the scales by using glycerin,water and gelatin, added the color I wanted from $.98 halloween cream makeup, heating it, and used a medicine dropper to make scales one by one on the counter top...the drops themselves only take about 60 seconds to dry and are ready to peel off, however, I made what seems like a thousand of these little scales...but this is very easy and very cheap to make. The good thing about this mixture is it can be reused and reheated as many times as you need. We used nude pantyhose for the legs and arms. For the top, we cut a hole in between the leg area for her head and then used the "leg" area for her arms. For both, I used hot glue and glued each scale on in the design I wanted. On the upper part of the legs and waist area, I used mod podge to glue on glitter, then used hot glue to add diamonds and pearls. I already had the diamonds and pearls, etc, but you can find these at Walmart.. I think the diamonds can be bought in bulk and different sizes for about $9.99 and pearls and glitter for a few dollars. We also used a nude sports bra over the pantyhose she wore as a top for more coverage. We did the same to the top as the waist area...glued on scales, diamonds, glitter and pearls. We painted her face, neck and hands with the same color we added for the scales and then used eyeshadow and glitter to set the makeup. We used the same technique on the lips then used a dab of liquid latex ($10 at Walmart) to add little blue diamond on her bottom lip. Then we used liquid latex to glue scales and gills onto her face, neck and hands. We bought a bag of sea shells that cost $10 as well, cut out the shape we wanted for the crown out of cardboard,used tinfoil for the crown base and used white duct tape to connect the crown together and hot glued seashells on. She wanted long beautiful hair, so we used a wig we had previously used which was perfect and didn't cost us anything since we already had it! We also used an old staff from an Ursula costume and painted it blue and added glitter. We also added a cape after hearing it was going to be cold....bought a yard of fleece and a yard of glitter material to combine together to lay over her shoulders. Topped it off with some disposable contacts that cost us $27.99 for the contacts, solution and case :) And that's it!!! We created the perfect look that she wanted! She was stopped all night, even in the rain :0, getting compliments on how beautiful and cool she looked!! We love this and hope you do too!!!