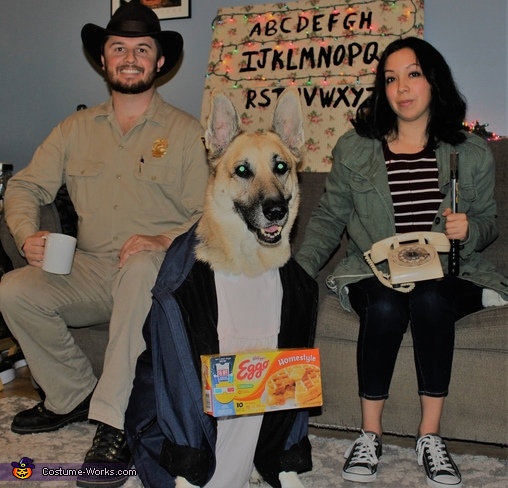 A word from Renee, the 'Stranger Things Trifecta' costume creator:

All characters from Stranger Things, Renee is Joyce, Justin is Hopper, and Leila (the German Shepherd, Renee's service dog) is Eleven. All costumes are home made. Leila is wearing a women's shirt with a sewn on collar to replicate Eleven's dress in the show, as well as a home made eggo's purse. I punched two holes in the eggo's box and inserted hemp string to make it a purse. Justin is wearing the same patches as Hopper, including a Hawkin's city patch, special ordered. Renee is matching to Joyce's attire on the show, also sporting an axe for the wall break through scene. The wall of letters is home made and we used a bed skirt to replicate the wall paper from the house in the show. Costs were low as we shopped at thrift stores or already had the supplies. We spent approximately $40 on all materials. We came up with the idea because we love the show and the second season was scheduled to debut around the time of Halloween - our favorite holiday!