Lilo and Stitch
by Darcie

Lilo and Stitch
by Yvonne 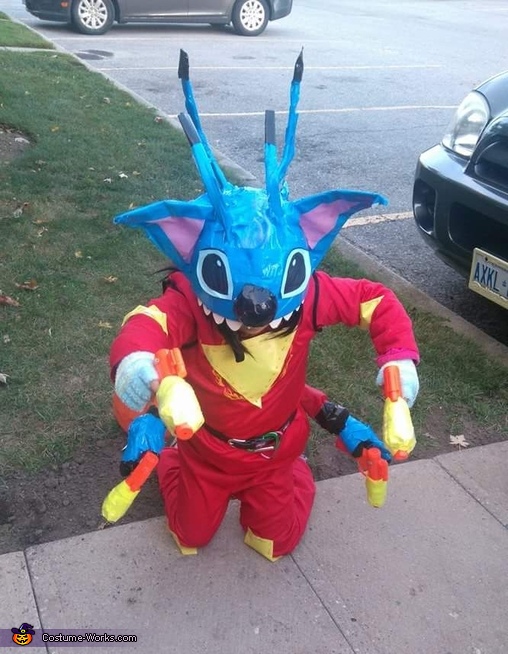 A word from Karen, the 'Stitch' costume creator:

My 8 years old daughter, Sophia Li is wearing the costume. Stitch is my favourate character, so sophia rubbed it off me. The idea of Stitch head using bike helmet popped in my head since last year I worked on Son Goku of dragonball. He had crazy amount of pointy spiky hair. Idea of Stitch limbs came from sophia blowing in a musical tube at Dollarama, I screamed at her that it was not hygienic.
Stitch body parts:
Head = old bike helmet $5
Skin color = 2 rolls blue duct tape $3
Ears = wire cloth hanger, break in half for each ear. Pink membrane is fabric from old princess castle
Antennas = wire hanger
Spikes = small baby hangers
Arms = 2 flexible musical tube $3, the red material was from a cut open backpack
Hands = black winter gloves for stitch. black nails, then blue duct tape in skin
Teeth = the cardboard of a picture frame
Eyes = hand drawn on paper, stick on with double sided tape.
Cute furr between antennas =fake toy hair
Nose = half of a spherical toy container, stuff with duct tape.
Red Jumpsuit = old halloween ninja costume, Stitch onto some yellow thick plastic fabric $10
4 Space guns = dollarama oranges toy guns. To make it bulk up, I added plastic bag. Add yellow duct tape , around $7
Belt system = fake carabiners to hold guns, so kids don't lose them
I used plastic bag all over as spacers. Ex. The spikes on the helmet is too small for the bike helmet openings. The musical tube was too narrow.

It turned out to be a whole family project. Dad drew the eyes and cut the teeth. Sophia did the helmet blue skin and stitching the yellow fabric, and added the cute furr. Mommy did 90% of the helmet and suit.

I want to say thanks to Costume works since Stitch only got so much more awesome, after we decided to enter your contest. Sophia insisted on having no eyes, and dad had to convince her that eyes made a world of difference.