Steve Jobs and his iPad Costume 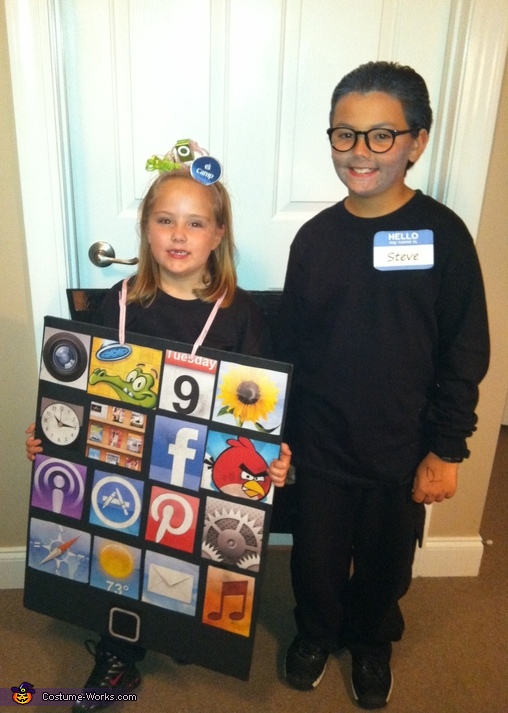 Steve Jobs and his iPad

A word from Tripp, the 'Steve Jobs and his iPad' costume creator:

My 11-year-old son, Thomas, came up with the entire idea of the costumes he and his sister, 5-year-old Maggie, are wearing. Thomas is Steve Jobs and Maggie is an iPad. My wife, the children and I made both costumes. Steve Jobs was made up of a black shirt and pants, a "My Name is Steve" nametag printed off of the internet, some reading glasses with the lenses popped out, some grey face paint and eyeliner for a scruffy beard, and grey paint and baby powder in his hair. The iPad was created from two poster boards connected with shoestrings at the top. We printed pictures of select iPad app icons and a Pink Apple logo (for the back) from Google Images and glued them on with spray adhesive. Her headband had a set of earbuds, an iPod Shuffle, and an Apple Camp patch attached to it. Both costumes were made from items we already had around the house so the cost was zero. The best part about the entire ensemble was that it was the brainchild of a very tech-savy 11-year-old.