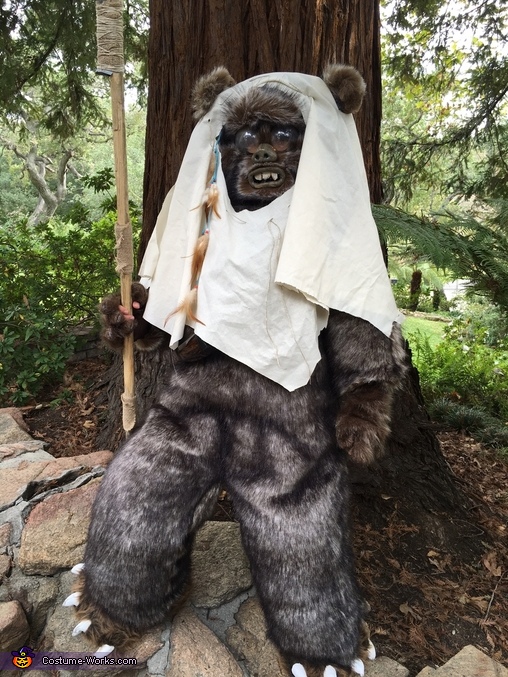 A word from Jeffrey, the 'Star Wars Ewok' costume creator:

How did you come up with the idea for this costume?

Since the age of three my son, Andrew, has been obsessed with Star Wars. For the past several years my son and I have been recreating costumes from the movies. This year we decided to go outside the norm and recreate a lovable creature from episode VI. The ewok is an iconic alien species who helps the rebels defeat the empire in one of the most epic space battles.

What items did you use to make this costume including accessories used?

How did you make it?
Step 1:
Combine hockey mask and child's army helmet using duct tape and glue.

Step 4:
Attach teeth to lips using glue and then attach to hockey mask.

Step 8:
Begin stretching fake fur around face, remembering that all hair starts from the nose and fans out. Install ornament eyes.

Step 9:
Create a pattern with the fake fur / cut fur and pin.

Step 10:
Stitch the pattern and create a Velcro opening in the back.

Step 11:
Create pockets (7) within the inside of costume to insert stuffing to create teddy bear look.

What reactions did you get when wearing this costume?

My son loves to show off the costume. He's been standing in front of our home waving at vehicles. The response from the community is positive. Vehicles stop to take photos and shout out "great job!”