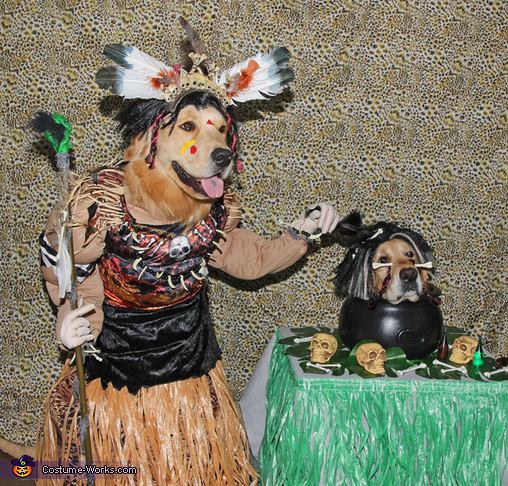 A word from Bonnie and Beth, the 'Spooky Witch Doctor and Shrunken Head' costume creators:

We thought it would be fun to dress our golden retrievers Gryphon and Phoenix as a Witch Doctor and Shrunken Head. These costumes took a lot of planning and forethought, and we worked hard to put it all together. For the witch doctor, we wanted it to look like Gryphon had human arms and was standing up like a human. We stuffed a muscle chest and attached stuffed skin colored gloves, to give him hands. We put a skull tunic over the chest, and added bone accessories like necklaces and bracelets. We also glued rafia onto the collar and sleeves. For the bottom of the outfit, we attached a grass skirt onto an animal print skirt. We then attached this to the bottom of the shirt. When Gryphon sat on a box the skirt hung down over the box, covering it, and giving the illusion Gryphon was standing up. For the headpiece, we attached feathers so that they stuck up over a bone crown. We put this on his head over a jaggedly cut black wig. We made him a staff to hold in his fake hand by attaching fabric and feathers to a wooden dowel, topping it off with a plastic shrunken head. Finally, we added “makeup”, which was cut from colored tape into shapes that struck lightly onto the fur on his face.

For the Shrunken Head, we needed to hide Phoenix’s body, and make his head appear to be sitting in a cauldron on a table. To do so, we had to make a fake table. We used foamboard, which was light, and cut a hole in the center. We then glued on gray felt for a tablecloth, making sure to cut a matching hole in it as well. We added a green grass tableskirt around the edge. For the cauldron, we managed to cut a hole in the bottom of a black plastic cauldron, and glued it onto the hole in the foamboard. Then we decorated the table with fake green leaves, bones, skulls, and bubble bottles for potions. Phoenix was then able to slip this over his head, and his body was completely hidden. We finished off the costume with a crazy jagged wig and a bone through the nose accessory.

These costumes took us a really long time to make and figure out, approximately 2-3 months. We really liked how it came out, though, and the illusions fooled everybody we showed the costumes to. We think it was a success!