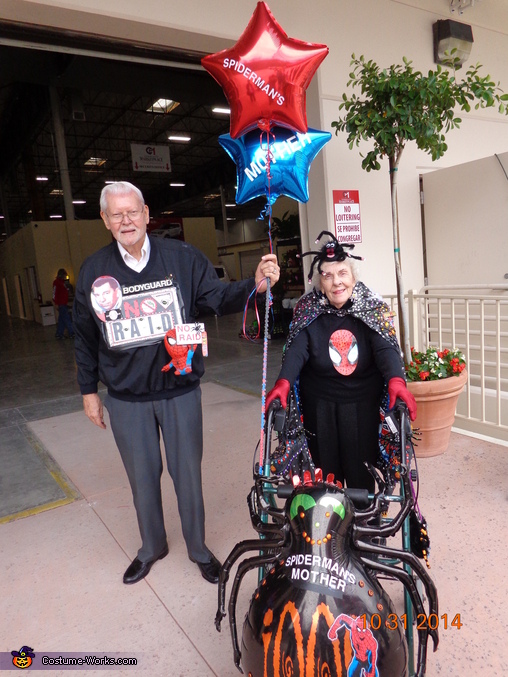 A word from Stan, the 'Spiderman's Mother & her Bodyguard' costume creator:

The whole world knows Spiderman’s story, right? Wrong! They don’t know the part revealed by our Halloween costumes this year. They do know that orphaned spider-to-be Peter Parker was raised by an ant or aunt. You choose who to believe. That he was bitten by an exotic spider, the bite that changed him into the super hero he is today. It’s that spider who never received the credit she deserves. You can remedy that. What follows is what no one knew until we told HER story in costume.
News that the spider had died after biting Peter was false. SPIDERMAN’s MOTHER lives, half spider half woman (a little of Peter rubbed off on her as well). She quickly hired a bodyguard, Web, Jack Web from the Dragnet security firm he founded after retiring from LAPD. With the powers she had given Spiderman, she knew he could vanquish all enemies, save one. SPIDERMAN’s MOTHER pledged to devote her life to protecting him from RAID, and going along for the ride is his niece SPIDEY GAGA, half spider half girl who looks just like her uncle.
My sister Jeanette, aka Spiderman’s Mother, is 92 years old (in spider years of course) and me (her brother Stan, aka Jack Web), a young 80. I’m not disclosing the age of Spidey Gaga to keep the enemy guessing about the stage of her powers.
Here’s what it took to put it all together.
HER COSTUME
Hat: Black cloth spider to which she added polished finger nails, eyes, eye lashes, a nose and human lips.
Top: Black long sleeve
Slacks: Black polyester
Shoes: Black SAS
Socks: Orange with black spiders
Earrings: White plastic spider
Mask: Spiderman’s face with Toby McGuire (Peter Parker) on the back
Cape: Black outer cape made from cheap black plastic table cloth. Lining made from plastic Spiderman table cloth. The outer is covered with many plastic spiders of different variety and color and HUNDREDS of colorful stick on crystals. The inner lining is also festooned with HUNDREDS of the same kind of stick on crystals. The black outer cape is covered with white webbing, photos of Spiderman and Jack Web peeking out, many stick on crystals and her displayed “web” site.
ON HER WALKER
A large Halloween spider balloon attached to the front of her walker with Spiderman’s Mother lettering and Spiderman decal. A yardstick is attached, decorated in Spiderman red and blue and stick on crystals, from which helium Mylar red and blue balloons floated. The red balloon bore in white lettering “Spiderman’s”, and the blue with “Mother”. On the left side of the walker she hangs her black cloth evening bag decorated with a variety of plastic spiders and stick on crystals. On the right side hangs a plastic skeleton next to a plastic figure of Spiderman. The skeleton holds a sign reading NO RAID. A dress shoe hangs by its laces from each of the walker’s hand grips. Each shoe has a large spider on top. Both the spiders and shoes are richly decorated with stick on crystals. And finally, battery operated lights hang on each side facing in to illuminate Spiderman’s Mother, her dress shoes and even his niece Spidey Gaga, who swings in her basket partly underneath and partly out the back of her walker.
HIS COSTUME
Top: Black nylon pullover bearing on front the Jack Web Warning…NO RAID and a small Spiderman doll holding that same warning. On the back is a large web that has caught “cans” actually pictures of RAID. The red spider in the center is decorated with red stick on crystals.
Slacks: Standard gray dress
Shoes: Black loafers
Many many hours were spent creating the costumes. The photos were taken this Halloween at the Grand Opening of the Community Marketplace in Moorpark, California who held a Halloween contest in conjunction. We won second place…a spider losing out to an owl for first place. We hope the judges didn’t think we “didn’t give a hoot!”
Highlight of that event for us was the four costumed girls in their twenties staring at us from some distance away. Finally one of them broke away to get a better look. As she approached us she exclaimed with some surprise, “We thought it was just part of your costume but you really ARE old people!”