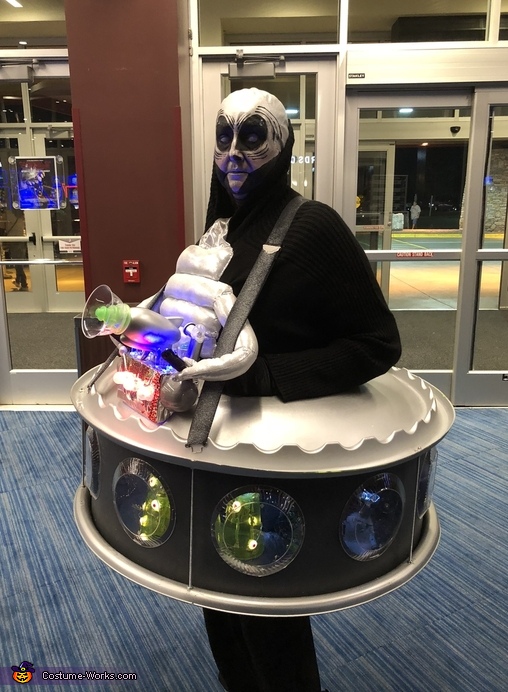 A word from Karen, the 'Space Alien Commander' costume creator:

Alien 2018,
Who is not curios about outer space and Aliens?
My dad always talked about NASA. Walking on the moon, and the thought of life on another planet. These things always intrigued him. Aliens and the thought of being abducted were number one on his list!! He said he would love to go with them! Which scared the heck out of me as a child! As an adult, I got the fascination! My father has since passed away. Our memories will live on! Which brings me to my costume. I also share that curiosity as my father did. This is how the idea was born.
My husband and I worked together and came up with the idea of me becoming the “head” alien, commander of the alien spaceship. I would wear a spaceship/flying saucer.
It just so happened that we had two identical snow saucers. My husband cut holes in them for me to step in to. This allowed me to actually wear the sleds. As for the width of the saucer, we picked a non corrugated piece of cardboard and cut it to the size we wanted between the two saucers. We planned on making little scenes of what it might look like inside a real alien spaceship. So my husband cut out circles to make “windows”. This gave us many ways to create different scenes for the inside of our ship. We covered those with clear plastic plates to give the actual window effect.
A lot of different things were collected to make our “scenes”! The dollar store and a really good imagination did wonders for them.
Scene 1 is spider themed. We have web material attached to the saucer with 4 spiders attached. One spider is black with a skeleton skull for a head. One has the black spider head but has what appears to be 8 human legs.
Scene 2 has two toilet paper rolls with styrofoam balls attached to the top. They are covered with paint/glitter/sparkly material. They are the chargers for our baby alien ship. Which is made of a styrofoam bottom, beads, and an upside down mini clear plastic bowl for the top of the ship. Also clear, red, and silver Easter grass coming out of the exhaust to make it appear to be starting up. My first alien guy, is at a control panel consisted of silver painted cardboard with electrical wire, two glass nightlight bulbs and different beads to look like control buttons. He was made from a miniature skeleton. Thinking aliens are short, I cut the legs off at the knees, covered the skull with shiny material and added alien shaped black felt eyes. Then I attached white fleece to make the cloak
Scene 3. The front half of a fan shroud is glued to a box, to look like a navigation table, complete with marbles and beads. My alien has a miniature ray gun in his hand which actually works! He is the navigator of the fan shroud.
Scene 4. Barbie is laying on a table covered with a blanket. It’s cut open at her stomach. There is fake blood and a little green alien coming from there. Her eyes are also blackened with some blood splattered here and there. She has two electrical wires coming from her temples and attached to a electrical box. Which was made from a toy Frankenstein set, and a half a plastic soda bottle painted silver. We have our alien appearing to be in the middle of an operation on Barbie. There are bloody spare parts all over the floor by his feet.
Scene 4. We always see humans inside glass cylinders in most alien movies. We have our own version! Lime green see through Dixie cups is the main part of our cylinders. We put miniature human Skelton’s into the cups. The skeletons were to big for the cups so we put a hole into the top of the Dixie cup and added clear plastic Christmas ornaments to surround the skull. Green puffy t-shirt paint was added to the skeletons to give an “alien was here” look. We have several of these “humans” in their cylinders. I found a set of battery operated lights that were eyeballs. I attached the eyeballs all over our cylinders. It Gives it a creepy vibe when lit up.
The outside of the ship also has joysticks and a control panel that lights up in one area with blue lights which are placed into miniature glass test tubes, and another area with red lights that are covered with the large clear plastic end of a container from a gum ball machine.
I’m dressed in all black, so I’m not noticed. I attached silver material to the front of my shirt which I stuffed to give it dimension. Also made alien arms that will attach to the joysticks on the flying saucer. I’m in full makeup with a balding cap over my hair. This makes me look like the alien who is flying the spaceship.