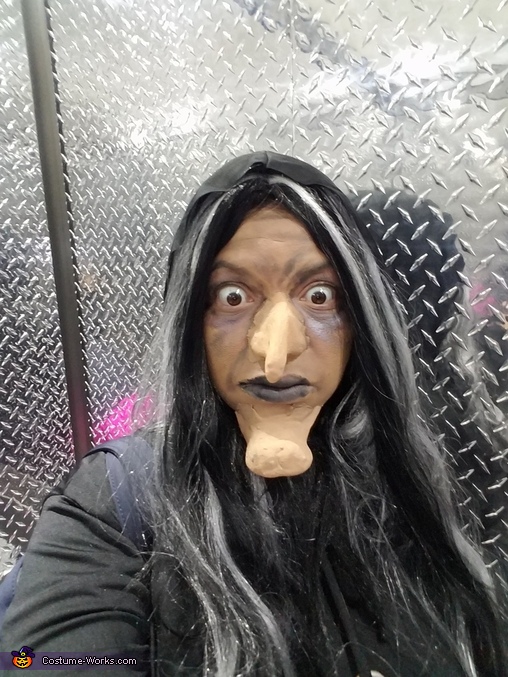 Tonio Steven is wearing the costume. The idea advise me on what was needed, because I had no idea what i was getting myself into because I don't have that creative touch like they do with the costumes. I don't usually dress up for Halloween, but this year I decided to be a team player and agreed to it because I had been sad thinking about my father who passed away last year. He loved seeing the different do it yourself costumes. I went to party city and got a nose, chin & a cloak like they told me to and my coworker had a wig. They told me to just use my everyday make-up and darken the frowning line on my forehead..omg i had no idea whst they were talking about got upset threw all the make-up in a bag, said forget and put my uniform on instead for work. When i walked in at work they kept telling me to go put my costume on so i went sit in a closet and starred at the wall..lol I peaked out the door and yelled for my supervisor and asked her if she could help me out. She said let me see what you have, then glued the nose & chin and told me to fan it to help it dry while she put on the rest of the make-up and 15mins later she was done and i couldn't believe that was me when i looked in the mirror. I loved it and so did everyone else. I've never taken so many pictures my customers kept asking if they could take a pic of me and a few of them thought i was a prop whenever i would stand still and not move.