Snow White and the Seven Dwarfs
by Sandi

Snow White & the 7 Dwarfs and Prince Charming
by Paula 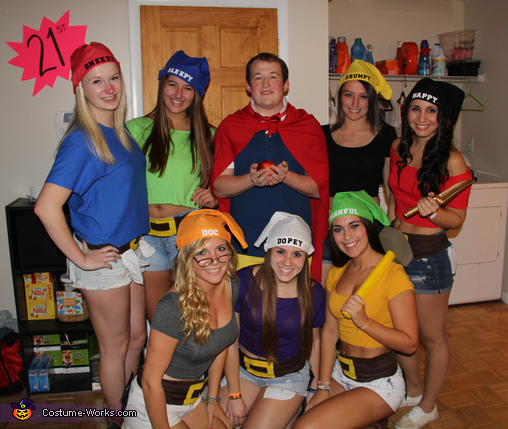 Snow White and his Seven Dwarfs

A word from Jackie, the 'Snow White and his Seven Dwarfs' costume creator:

Living in a house with seven girls and one guy we knew we had to be creative this Halloween. Snow White and the Seven Dwarfs was the perfect idea for my roommates and I, and we loved the idea of turning our roommate Jonah into a male Snow White. First we had to figure out a way to make that happen and find the proper clothing. We were able to find bright yellow pants and decided to have him wear a white collared shirt under a blue shirt with a red cape. Instead of having a red bow in his hair like Snow White does, we had him wear a red bow tie instead along with the red cape, while holding a red apple! For the 7 Dwarfs, I made the dwarf hats out of colored fabric using fabric glue and iron on letters for the names! I made the belts out of brown fabric and yellow felt also using fabric glue. Finally I cut the Hi Ho's that we safety pinned to the back of our shorts out of black and white felt. The DIY process for this costume took several days and many, many hours but the reactions we got on Halloween night was definitely worth the time. Everyone loved our costume and was calling us by our dwarf names all night. The personality of the Dwarfs definitely matched my group of friends so it was easy to be in character throughout the night!