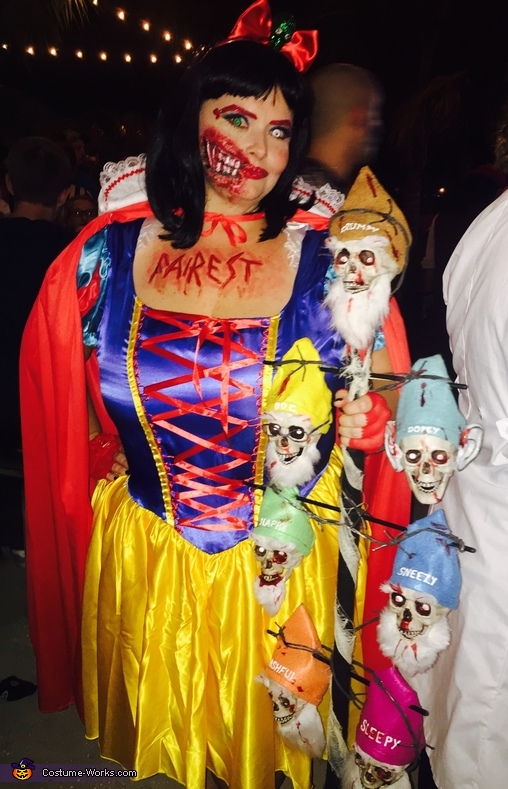 A word from Danyeil, the 'Snow Fright & the 7 Dead Dwarfs' costume creator:

My costume is Snow Fright & the 7 Dead Dwarfs. I love twisted fairytales and gore and the details of my costume were my idea. I bought the snow white dress only. I created the cape, the collar, the headband with green poisoned skull and I created the 7 dead dwarf heads. I used skeleton heads, added felt for hats, fur for beards and eyebrows, made the stake out of pvc and fabric and then used dowel rods to create the stakes through their hats, added blood and barbed wire for effect. I bought white and green contacts (because I was poisoned by the apple) and then I created the rotting face/exposed teeth with liquid latex, torn cotton pads, craft paint and fake blood. I created the poison apple by cutting open a fake apple, pulling out the insides, gluing a skeleton head inside and painting it to look like it was rotting. I added strings of hot glue for the webbed effect. Every year we attend a local Halloween Bash where people go all-out with their costumes. I had my picture taken about 500 times that night. At one point I was standing in a crowd of people, looking from camera to camera, having my picture taken over and over. I felt like a Halloween celebrity! Everyone absolutely loved my face gore and my dead dwarf heads. They said I was the sickest person there, in the best possible way! Exactly the reaction I was aiming for!