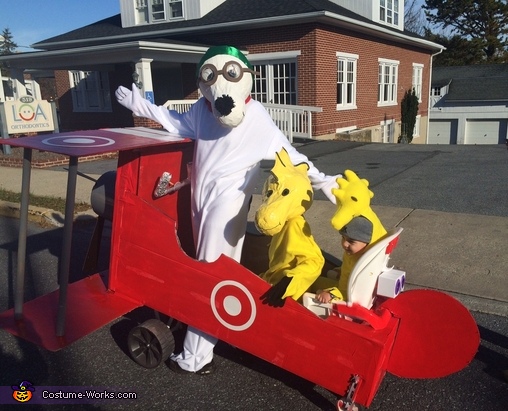 Snoopy & Friends - In Search of the Red Baron

A word from Marni, the 'Snoopy & Friends' costume creator:

When we learned of the new release of The Peanuts Movie, a Snoopy-themed idea was born. We didn't want to go the route of just Snoopy and his doghouse, so we opted for recreating the imaginary plane that Snoopy often flies in search of his nemesis, the Red Baron. The participants were: Snoopy (mom), Charlie Brown (dad), Woodstock #1 (7 year old son), Woodstock #2 (2 year old son). All pieces were entirely homemade! The costumes were crafted with fabric, stitch witchery (because I can't sew), paper mache (for the two large heads), and plenty of hot glue, markers, etc. The plane started as a giant cardboard box. We added lots more cardboard, wrapping paper rolls, wheels from various things around the house, an old high chair seat, PVC pipe, duct tape, zip ties, and spray paint. Snoopy was able to walk along inside the plane while the Woodstocks rode along. We hooked up a small speaker and played Peanuts music as well.