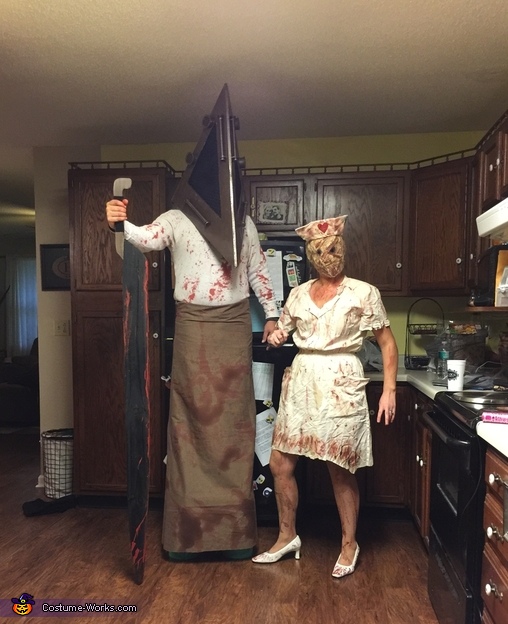 A word from Paige, the 'Pyramid Head and the Faceless Nurse' costume creator:

My husband is Pyramid Head from Silent Hill. We were inspired my our love of the movies itself. We always hand make our costumes and thoroughly enjoy it.
His Costume...The mask was made from triangular cut out, large cardboard, and glued together in the pieces to shape it as a pyramid. he used a hard hat, underneath piece to hold it onto his head (not the actual hat, the plastic part inside the hat) he then used small pvc piecing's and electrical piecing's for the outside décor. inside the eye parts was wiring off a old metal object, and painted black. the skirt was made from a old vintage curtain and sowed into a skirt, then threw blood over it. the knife was made out of a large piece of wood, shaved as a knife and a handle on end, then painted black and added blood. the stilts to make him tall, was also homemade. they where made from large pvc pipe and stuff the goes on pvc pip as a cover, then bolted old tennis shoes in them to walk with. then he painted mask with a bondo type stuff to smooth it, then painted, then spray painted it with a rustic color.

the faceless nurse...I used a plastic bag, cut holes out of the eyes and mouth, then got plaster, cut it into strips and laid them all around my head, but not all the way down the back so I could get it off. once it dried a few minutes, I took it off to add more layers of plaster and then place them to look somewhat uneven. I then painted to mask in coffee, to give it a dirty look. then painted a mixture of paint to make "old blood" and then slight black coloring for a burnt look. once I finished the coloring I wanted, I drew tiny veins in places. with the nurse outfit, I found it at a thrift store, I soaked it and my tights in tea. then once it dried, I burned the edges and added coffee spots, blood and some black. same with tights, and added veins on them. got some old shoes and splattered blood on them. I wore cut out panty hoes on my head so you couldn't see my hair from the back of the mask. it was so fun! we where a big hit. everyone that knew who we were wanted pictures, if they didn't know,, they still did because we were scary and going to give them nightmares they would say. the stilts set it off even more! we won our local costume contest.