Silent Hill Pyramid Head and the Faceless Nurse
by Paige 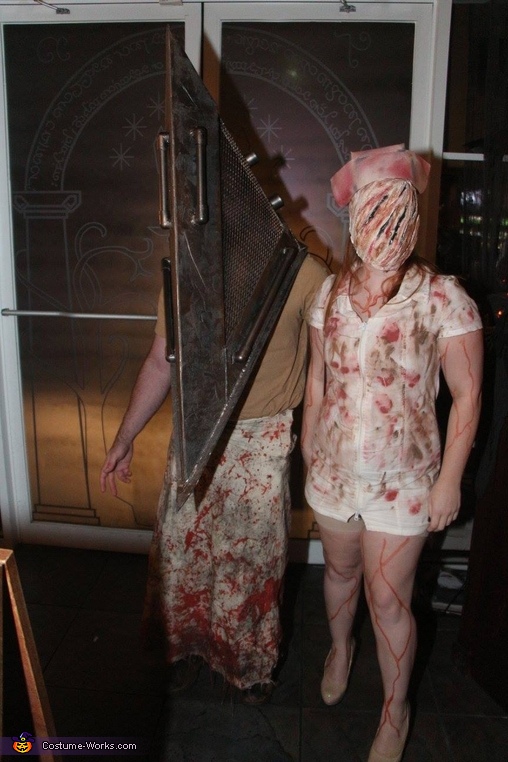 A word from Gabrielle, the 'Silent Hill Pyramid Head and Nurse' costume creator:

These are two characters out of the movie Silent Hill.Jason is wearing Pyramid head and I am wearing the nurse costume. I watched Jason get into making his head for the costume and how well it started to come out, and i got so excited to make a costume that would make it all come together.

Pyramid Head: He took a 3-fold display cardboard and cut it to make the foundation. For the screen look he took lathing screen for the outside and a door screen for the inside to further the hidden look. He put plaster and spray paint on the cardboard pieces and attached PVC pieces including pipes and corners, and caps on the back of varying sizes. The skirt is broadcloth, similar to burlap. He was able to take the material to Centralia, PA where silent hill was based off of and drag the material through the coal there. He then took fake blood and made the splatter markings.
The blade is cardboard, polyfill, plaster and spraypaint.

Nurse: I took a nurse costume, modified the collar to make it look more like the vintage style. I took a pair of scissors and roughed up the edges. I took paint and smeared brown and red on the dress. I also took some thread and made long stich marks very similar to the patchwork in the costumes in the movie. I took more of that fake blood and made veins. For the mask i took plaster cloth roll cut it into strips and painted it. I hot glued the painted nurse hat to the mask, and viola!