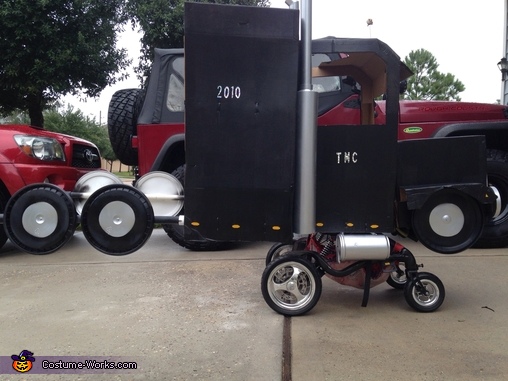 A word from Heather, the 'Semi Truck' costume creator:

My two year old son, Wyatt, is in a wheelchair due to CP, hydrocephalus, and other medical issues. It was because of this we decided to build a custome for him that would fit over his chair. Wyatt loves semi trucks and since my boyfriends dad is a trucker it didn't take love for the idea to take off. His truck was built out of three boxes, PVC pipe, zip ties,black paint, gore ill tape, bungee cords, an air filter, two closet stickon lights and reflective tape/lettering. His stacks had caps on the bottom to accommodate dry ice for smoke. Two plastic tea containers were his gas cans and his wheels were five gallon bucket lids.