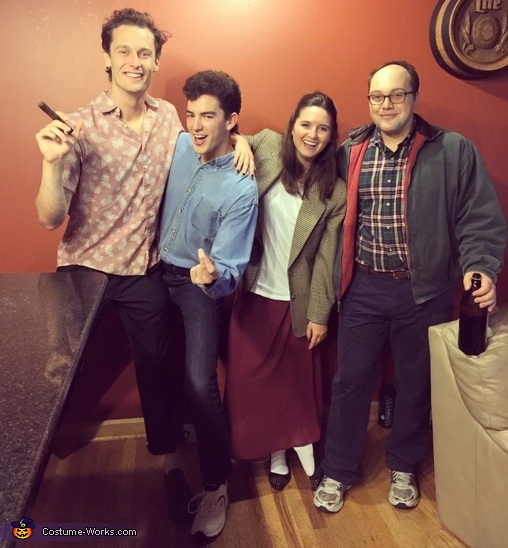 A word from Conner, the 'Seinfeld Characters' costume creator:

My friends and I are huge Seinfeld fans, so for this years Halloween, we dressed as our favorite characters: Jerry, Elaine, George, and Kramer. Last night, on Halloween, we got so much positive feedback... At least 5 different people stopped us to ask if they could take our picture to send it to their friends/parents. We have watched Seinfeld for years and had a pretty good idea for what to wear for each character. For Jerry, I wore jeans, a light denim shirt, and white tennis shoes. I also cut my hair to have a mullet. My friend who dressed as George completely shaved the top portion of his head (so funny) and wore classic George clothes. My friends who dressed as Kramer and Elaine wore similar clothes to those that the characters wear in the show. Nothing that we wore we bought from the store, we were able to dig through our own closet and closets of friends to find just the right clothing for each character. People couldn't believe their eyes when they saw us. We definitely pulled off the look. My friend who dressed as George made everyone laugh, and everyone commended him for shaving his head to match character. When we went out we sat at a booth the entire night (just like they would have in the show), our waitress told us that we 'made her night'. It almost seemed like everyone we walked past yelled out "Seinfeld!" to us, so great. Not only did we look like the characters, but we also acted like them the entire night, never breaking character. Years of coming home from school to watch Seinfeld was finally paying off. It was easily our favorite Halloween and will likely be our costume for years to come.