Siren and Sailor
by Kathleen 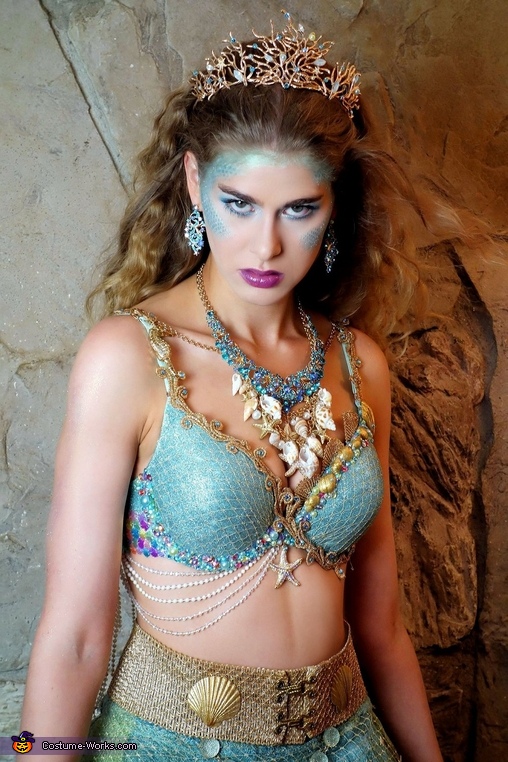 A word from Jacquelyn, the 'Sea Siren' costume creator:

I have been designing costumes for my daughter since she was two years old. It's been a tradition that I've always loved, and it's great fun to still be able to design her costumes even though she's an adult. This year's costume is a Sea Siren, and probably one of my favorites.

The bra is what I'm most proud of. I took a bra we got on clearance and coated the material with fabric glue and added ultra fine glitter. I then took gold birdcage netting to cover the cups to add to the siren/mermaid theme. The gold trim was a wonderful find and I thought it looked like waves. On one side I added real shells that I painted gold and surrounded with various crystals and half pearls. I then heavily embellished the bottom of the opposite cup. I also added crystals to the wave trim, which was a great final touch. For the center, I added a rhinestone starfish. Also, if you notice the bra strap, I added seahorse that I had found (it's belly is full of pearls). I then draped pearls along the bottom of one side to give it an asymmetrical look.

For the sides of the bra, I wanted to create an illusion of gills. I found shell-shaped sequins which I sewed slightly overlapping each other. For the back decoration I made a band of fabric and then added loops of pearls in semi-circles. I added snaps to the band so it could be snapped into place after the bra was put on.

The skirt is a coated glitterized tulle. I layered blue and green tulle and made a handkerchief circle skirt, and gave it a more asymmetrical look by making the front a little shorter than the back. I then took gold netting and draped it over the skirt along the top, embellishing it with tiny crystals and real mini starfish. I attached a sparkly mermaid-scale necklace at the hip line for decoration. The belt is vintage 1960s metallic woven elastic. I really liked the gold metal hooks in the front. Given the age of the elastic it did keep stretching, so I had to bring it in a couple times. I painted more shells gold, added gold glitter and glued them to the belt. I ended up sewing loops of thread over the shells in order to avoid them popping off and it worked (even after hours of dancing).

I decided to purchase the crown/tiara from eBay. To turn it into a crown suitable for a Sea Siren, I attached various crystals, pearls and even a couple mini starfish. The layers of necklaces were also finds on eBay. Due to the weight of the shells, the necklace tended to clump and not spread out, so I attached a couple chains to the necklace and then extended them out to the bra straps. It kept the necklace draped nicely, and we ended up liking the look of the chains. I bought a pair of gladiator shoes on clearance, but the color was wrong, so I just layered on the glitter to create matching shoes.

The mermaid makeup "scales" were created by stretching a hair net over the face, and highlighting with cream eyeshadow, in teal and silver colors, and then adding glitter. While blue lips are popular with mermaid makeup, they are also really hard to pull off. As an alternative we went with pink lipstick blended with blue eyeshadow. The purple look isn't quite as harsh but still has a blueish sheen.

Everyone has loved this costume, although there's been debate on the title. It's been called everything from Sea Siren, Water Nymph, Mermaid, Sea Goddess, Sea Witch, or Water Sprite.