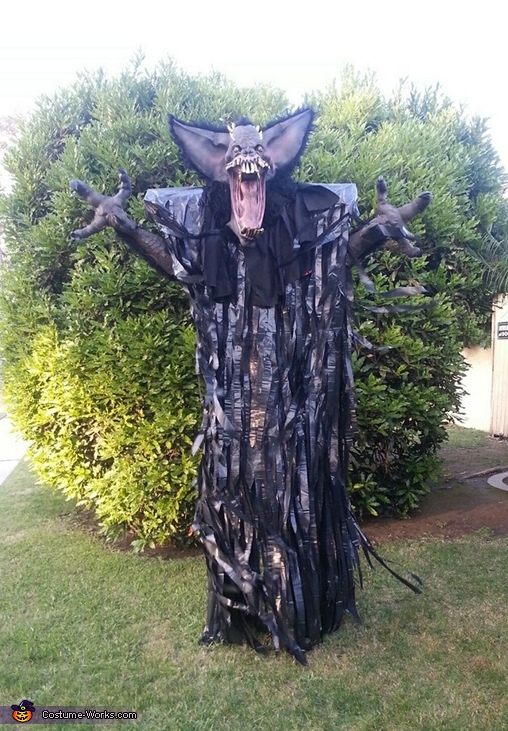 A word from Ashley, the 'Screech' costume creator:

"Screech" was summoned by some of the darkest and most evil sprites that this earth will ever face. He rose from the ashes of plagued souls who where sacrificed to bring this demon from the under world. The name Screech was given to him by his victims. Because the last sound they hear is the ear Pershing shriek right be for his talons snatch them up to be devoured .

He was maid from a per-bought mask and talons. Then we added stilts to give him the power to tower over people. To hid them we took 3 large trash bags and cut Varies lengths to give it a feathery like appearance. Then took a card board box and cut it into shoulders buy cutting a hole for a head and folding it. Them we added 10 more trash bags with the same cutting technician to give him an appropriate sized body to the head. Then we took macenairy ladder and welded it together to form wings. They were also covered in about 5 trash bags. A black backpack was attached to strap the wigs to the actor and a large belt to attach it firmly to his waste.

It's a recycled costume completely cause the mask was from another costume the stilts where from work and the rest was stuff round the house.