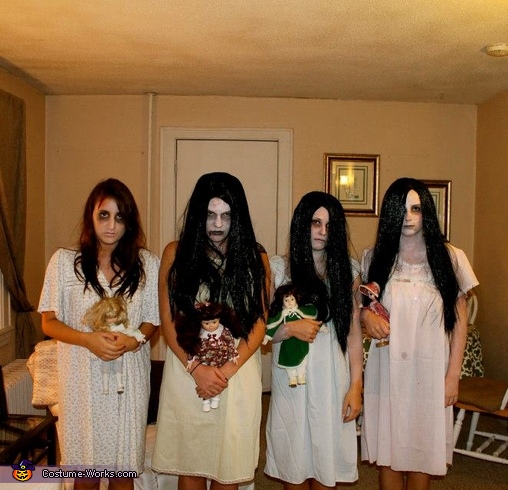 A word from Katie, the 'Scary Little Girls' costume creator:

The costume that I am submitting is worn by myself and three other friends. We are seniors at the University of Connecticut. It is hard to put an exact name on what our costume is but it can be best described as "scary little girls". Clearly this is not the stereotypical way college girls dress up for Halloween. We woke up Halloween morning and said, "let's be scary"! While taking a stroll through Good Will we found $.99 night gowns and $1.00 dolls. Those 2 things are what led to us being the scariest people at the party. People were asking us to take pictures of them and boys were telling us to stop looking at them. It was awesome. The costume was topped off by long black wigs and face paint. Fake blood definitely helps enhance the effect! The following day in class people were talking about "the scary girls with the white faces and the baby dolls". This costume will definitely go down in the record books at UConn.