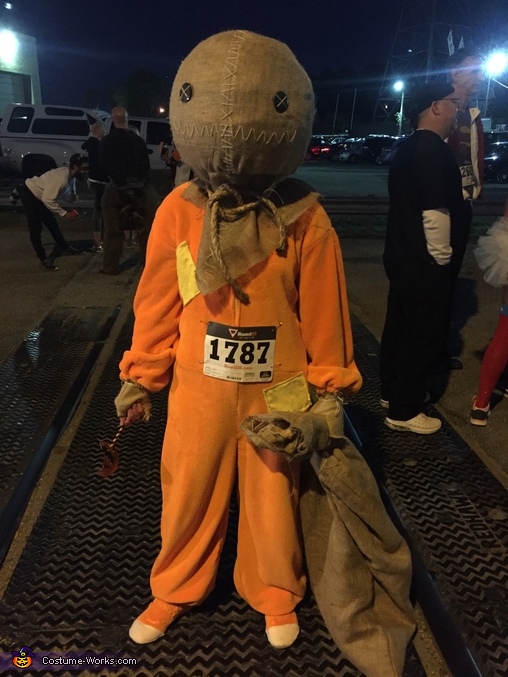 A word from Jessica, the 'Sam the Demon Trick-or-Treater' costume creator:

I am wearing a costume of Sam from the movie "Trick 'r Treat". Halloween is my favorite day of the year and Trick 'r Treat is one of my top favorite movies. I love the character Sam. He is super cute but also scary, and he acts as a sort of guardian of the Halloween traditions. Who better to dress up as on Halloween than the trick-or-treating guardian himself?

I bought super soft and fluffy fleece to construct the pajamas. I have never sewn clothes before or used a pattern before. I used my measurements to figure out how to cut the pieces for the pajamas and sewed them together myself. I even figured out how to include a zipper on the front. I used elastic on the wrist and ankle cuffs. I cut out a square-ish piece of fabric to sew onto the back to imitate a butt-flap, haha, and attached buttons to the corners. For the burlap bag and gloves I sewed them together with fleece on the inside of them. I wrapped twine around the wrists. The head was made by covering a beach ball with paper mache and painting it brown. I cut a rectangle out of the front so I could see. Then I used twine to make the stitches on the burlap mask and glued button eyes on the burlap. Then wrapped the burlap mask around the paper mache head and cut off the excess burlap, and hot glued the ends down. I tried to craft the pajamas to fit me the same way they fit the character in the movie and tried to make it screen accurate as I could. I absolutely love the end result!

The costume was worn to a Halloween 5k, a big Halloween party, and of course Halloween night for passing out candy. It was a huge hit everywhere I went with it. Even the news at the 5k wanted a picture of me which is now on their website.:) A lot of people were complimenting about how great my costume looked, even though most people mistook me for a scarecrow or a voodoo doll they still loved the costume and wanted to take pictures. A few people who were fans of the movie knew that I was dressed as Sam and were very excited to see the costume and said that I looked exactly like him. It was a ton of fun!