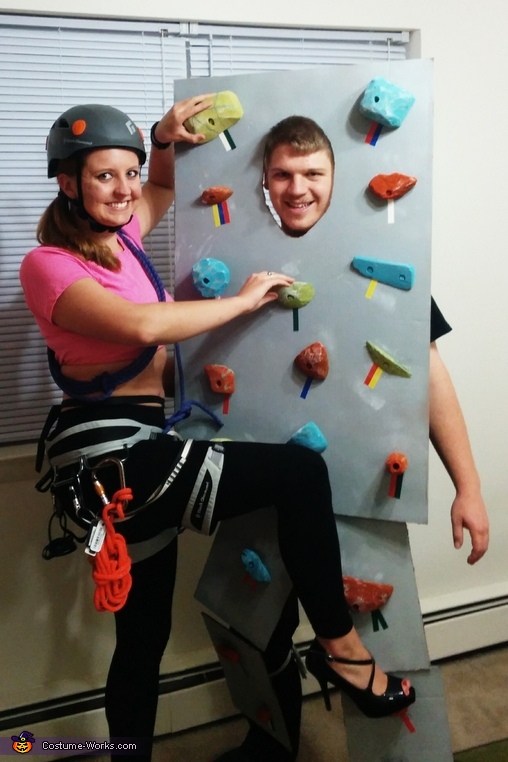 A word from Arianne, the 'Rock Climbing' costume creator:

My boyfriend and I went as "Rock Climbing" for Halloween this year. We got the idea because our first date was Rock Climbing, and we thought it would be awesome for one of us to be a Rock Climber, and the other to be the Rock Wall. I wore all of his rock climbing gear (plus some heels just to make it fun!) and he made his rock wall by hand. He spray painted cardboard from a flattened box to make the main portion, cutting a hole in it for his face, and made smaller cardboard pieces for the armor-style leg boards. We hot-glued some fabric to the back and tied it around the back of his neck, his torso, and his legs to hold each of the pieces on. To make the rock holds, he hand-sculpted styrofoam that is used for making floral arrangements using a knife. Those were then spray painted and hot-glued onto the board. For finishing touches, he electrical tape to represent the climbing routes (and apparently he actually did these realistically) and added climbing chalk for effect. Needless to say, I was impressed with his handiwork, and we were both happy with the way it turned out. We were told that night that our Halloween costume ROCKED... ;-)