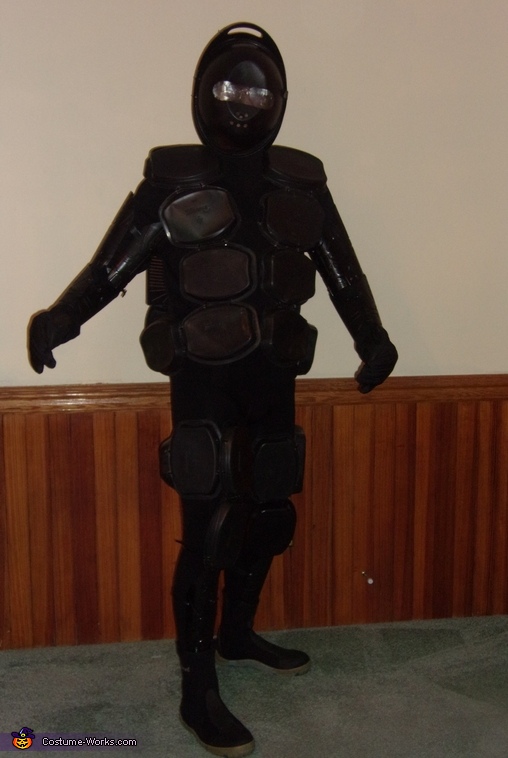 A word from Paul, the 'Robot' costume creator:

ROBOT HALLOWEEN COSTUME
This costume is a remake of a previous one I had made for a Halloween party. The first one was great to look at, but tough to wear. This one is more flexible, and lighter in weight. The bulk of the panels are plastic serving dishes from weight watcher meals. There is something wonderful about having a small thin wife. I hooked them together with cable ties, mostly 5” and a few 10”. I also used some pop rivets where needed such as mounting the electronic circuit boards. The top part of the back of the costume was the back of an old PC monitor, where I had gotten my electronic parts. There is also some use of Velcro.
The head piece is two dollar store bowls, one clear and one originally green plastic. I covered the inside part where I look out with screening, so I can look out but other people cannot see in. The arms and the bottom of the legs were store brought pieces designed for costumes. The fan on the back is not running, but I do plan to get it going again for next Halloween. Most of the entire piece was painted with semi black paint with the exception of the black gloves and the boots from my wet suit. (I surf).
As with most of my costumes, most people are impressed with the detail and originality. I have been scaring and entertaining people for over thirty years at this house. Some grownups I worked over several years ago are returning with their own kids. I am 69 years old.
I punched the holes in the serving dishes with a manual punch which I inherited from my father. The drilling in most of the other pieces was done with a drill press which had also belonged to my father. I have been doing costumes for at least thirty years; there are a few examples of my work on my website www.ppugartist.com. My original robot costume is shown on that website; it is listed under found objects sculpture. I had made some minor changes to that costume to make that into a sculpture piece.
When I use this costume for Halloween next year to work over the trick or treat crowd, I am going to attach a drink bottle to a belt and run the tube into my head piece to avoid having to remove the mask for a drink. I plan to use this at local bars next year to try winning prizes. I may have my wife come as a school girl with a controller to create the illusion that she is making me move. I had won a prize at another bar two years ago when I went as a Cyclops with a movable eye.