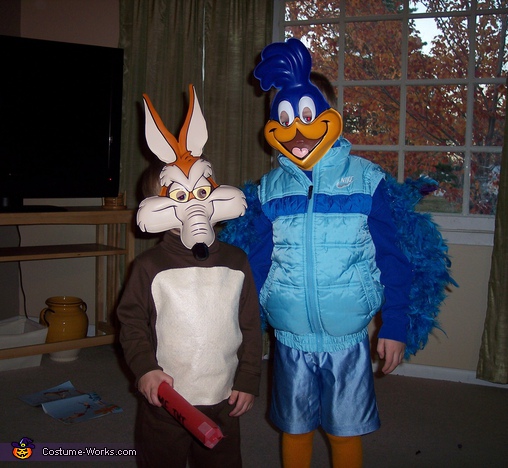 The Roadurnner and Wile E. Coyote

For the coyote, he wore a brown turtle neck with a piece of tan felt stitched to the front. He also wore a pair of brown sweatpants with a tail attached. He is carrying a homemade stick of ACME TNT.

The roadrunner is wearing yellow soccer socks with light blue shorts. He has a blue long-sleeved shirts on with a light blue vest. I took a boa and cut it apart and pinned it to the sleeves of the shirt. For the tail, I took 2 blue feather dusters, a turquoise feather, and a purple feather. I used blue duct tape to attach them together. Then, I duct taped them to a belt which he wore under his vest.

The masks were purchased online.