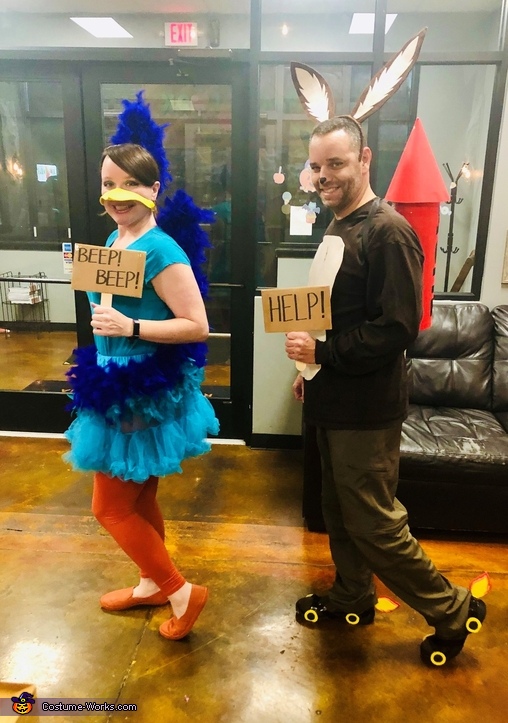 Our costumes were inspired by the Saturday morning cartoons we grew up watching and loving. For the Roadrunner costume, I used a variety of different materials that I purchased at Hobby Lobby and Walmart, a plastic sword I bought from Dollar General, and a few pieces of clothing I either owned or purchased. My headpiece was made from floral wire and part of a feather boa, my beak was cut into shape from a foam visor, the skirt was made from two different colored feather boas and a turquoise petticoat, the tail was made from a plastic sword and feather boa, and the shoes were made from a pair of plain white canvas sneakers and orange acrylic paint.

For the Wile E. Coyote costume, I also used a variety of materials that I purchased from Hobby Lobby, and a few pieces of clothing that my boyfriend either owned or purchased. His ears were made from felt and floral wire and attached to a headband, which I then covered in felt. It was while I was making the ears that I learned that hot glue was called that for a reason, and I still have the blister to prove it. His shirt was purchased, and I added a large piece of felt to highlight the chest area. His shoes were made from a pair he already owned. I used duct tape (which I folded in half and wrapped around the shoes) to make the straps, and foam pieces to make the wheels and flames.

Wile E Coyote's rocket was made from two plastic cylindrical containers duct taped together and covered in poster board, with braided white cord hanging from the bottom to make the fuse. I added straps that I removed from a bag to make it wearable. The signs that we both hold were made from pieces of an Amazon box and two large popsicle sticks. Overall, these were fun costumes to make and wear (even if I'll be cleaning up feathers for the next few weeks) and they were a crowd favorite at the event we attended.