Red Riding Hood and The Wolf
by Tal and Linzy 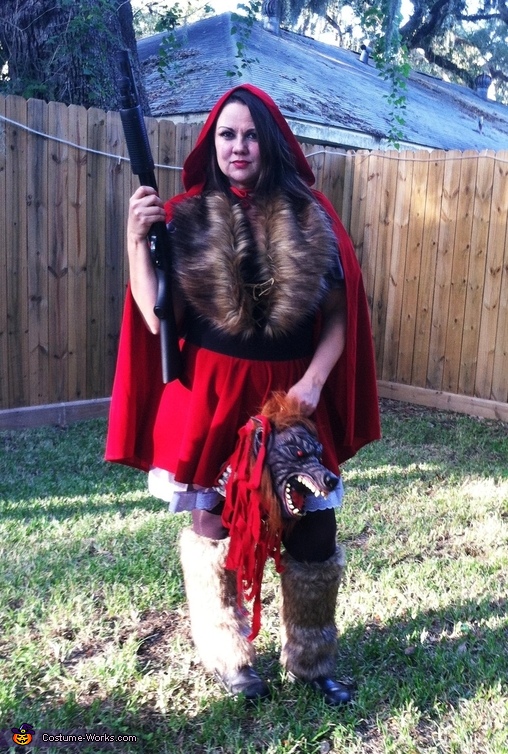 A werewolf ate my Grams and my anger turned this sweet little basket-toting girl into a hardened wolf hunter. I killed the wolf and turned his pelt into leg warmers and a shoulder wrap to keep me warm while I hunt for other werewolves. The shotgun is my weapon of choice and the wolf head is my trophy.

I got the dress and cape from a costume shop. It's just a regular Red Riding Hood costume. I dyed the white parts of the costume with black dye, but they turned out grey, which was still fine for the dark look I wanted. I found the fur leggings and shoulder wrap on eBay. I just tried to make sure the fur was about the same color as the wolf head. It was off a tad, but nobody noticed but me. The wolf head is a mask from the costume shop. I stuffed it with old dish towels, put black fabric inside the eye holes, and hand-stitched red fabric to the neck opening to cover the stuffing. I cut up a red sock into strips and stitched them to the red fabric to make it look like stringy guts hanging from the neck. I also used a piece of vertebrae that I had from a "bag of bones" to make it look like the wolf's neck bone. I got the shotgun from the costume shop. It was camo, so I spray painted it black. All that, black boots, and red lipstick was all I needed to become Red Riding Hood Wolf Hunter. This photo was taken for my dress rehearsal, but on Halloween night, I included some wounds from my battle with the wolf. I just used modeling compound and make up to create claw marks across my chest and fake blood spatters on my face and arms.

The costume was a hit at the party I went to. The only problem was that I had to cap a few more werewolves off before the end of the night. All in a day's work for a wolf hunter though.