Stay Puft and Ghostbuster
by Bri 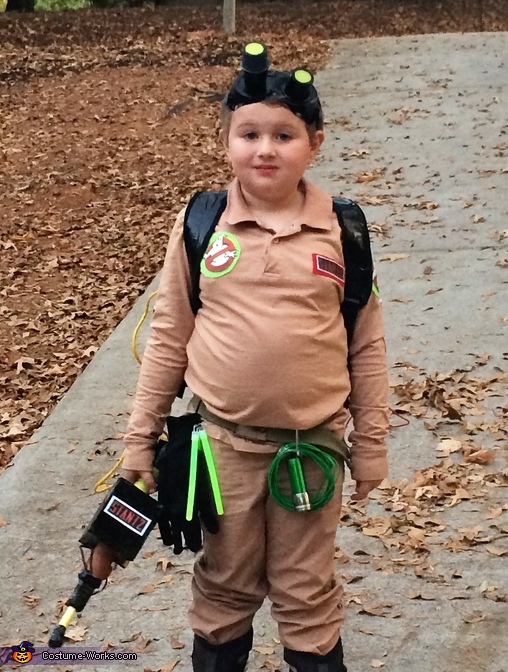 A word from Julie, the 'Ray Stanz from Ghostbusters' costume creator:

My son, Cooper wanted to be Ray from ghostbusters. Not just any costume would do, he insisted that he should closely resemble the original cartoon Ray. Online costume searches only left us with cheap looking options. I began the search for a costume that would make my son feel and look like a real ghostbuster. I began with a plain white shirt that I dyed to the brown color we needed. The pants were also added to the dye bath to make the pieces look more uniform. I then copied some Ghostbuster logos onto heat transferable paper and made some little badges along with a name tag. The actual clothing part was fairly simple and quick, taking approximately one hour. We paired the costume with some boots that resembled Ray’s.
Next was the proton pack, ghost trap, and ghost blaster. The proton pack was the most time consuming and ending up taking about 5 hours. I used the straps from and old backpack, a cereal box attached, and the whole thing covered in black tape. I then used miscellaneous house hold objects to make attachments onto the proton pack. I took a cheap foam sword and cut it up, taped it up with some recycled boxes added on for the ghost blaster. I used a recycled box cut down the center, with caution printed paper for the ghost trap. I gathered some old cables and attached the pieces to the proton pack. I then added some printed out ghostbuster symbols and “STANTZ” for decoration. The cereal box attached to back not only provided a proton pack, but doubled as a candy bucket for Cooper’s candy collection.
The ecto googles were crafted with a $1 pair of safety googles that were painted with Keurig painted cups glued on. I also added some little slime- colored caped to the eyepieces to tie everything in. I recycled and old belt that I trimmed off and attached odd and ends to. I used some old cable, a little flashlight, a pair of gloves, and some glow sticks to give the look of a ghostbuster belt.
We were bombarded by onlookers when we set out to trick or treat. People of every age and type were quoting ghostbuster sayings and loved Cooper’s accessories as well. Everyone was saying that Cooper was going to catch all the ghosts and keep the neighborhood safe. People would turn people around to examine his proton pack after he would say trick or treat. Cooper was extremely delighted with all the comments and felt like the bravest trick or treater around. People were shocked when we revealed that the costume was “homemade.”
I was extremely happy with the outcome of the “homemade” costume. I was also happy that I only spent around $15 and ended up with a much cuter, unique presentation. It is often hard to resist buying an already made costume to save time. I am so happy that we chose the route we did and also recycled many materials by doing so. The simplicity of the outfit also made it an easy wear for Cooper. Cooper was very proud of his costume and has already said that he will be Egon next year.