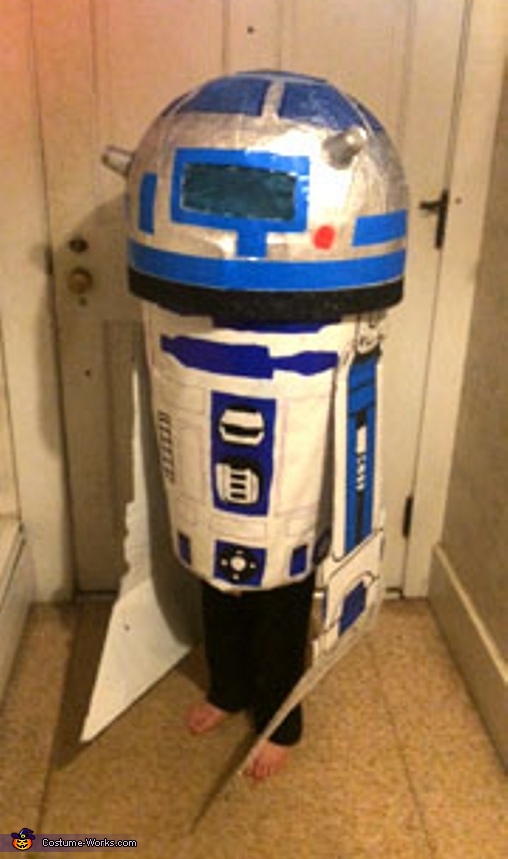 A word from Melissa, the 'R2D2' costume creator:

My grandson wanted to be R2D2 this year. How hard can that be, I asked.
I started with paper mache for the head, boy was that a mistake! It was messy and way too heavy! Luckily, that was the end to my hard, messy attempt. The rest was pretty simple and quick!
Using a yoga ball as a form, I covered it with plaster wraps. I bought the quick dry kind and was happy with how quickly they did dry! I didn’t remove it from the ball until the next day to make sure the outside was nice and dry. Then, I let it sit another day to make sure the inside was super dry. Since the head is MUCH bigger than my grandson’s, I cut some slits in the top, ran some white duck tape through and taped his old bike helmet to the inside. I then balled up some duck tape, sticky side out, to stuff between the helmet and the head. Next, came the spray paint. Again, I chose a quick dry type. I sprayed the whole thing silver, gave it a couple of coats, let it dry in between. Then, I let it completely dry overnight. I made a stencil to spray the blue center of the head. Yup, quick dry!
The body started out as a laundry basket that I covered with white vinyl. This was my cost screw up. I bought it at Joanne’s for about $11 a yard. The next day, at Walmart, I saw it for about $6 a yard. I hot glued the vinyl to the laundry basket then added a layer of silver, shiny duck tape around the top and bottom edges. I cut arm holes through both layers, trimmed the basket, and added some padding around the lower edge. I used leftover vinyl for straps to go over my grandson’s shoulders to hold the basket up. I duck taped those around the inner basket several times.
The arms are cardboard that I sprayed quick drying white on both sides. Another area I would change in the future… I made the arms too long. When he climbed stairs, they got in his way. At his costume parade, the little girl behind him kept getting too close and at one point, her dress got caught on one of his arms. So, if I made it again, I would probably make the arms stop at about his knees.
Detail work! I used Solo shot glasses for the knobby things on the head. (Spray painted silver.) I cut out in front of my grandson’s eyes and added blue fine mesh material so it was covered but not obstructive. I used blue Sharpie on the top section of design. The bottom portions were blue duck tape, white duck tape that I colored with red and yellow Sharpie to get the dots, and a black sparkly duck tape. I made stencils for the body details and drew them in using black, blue and gray Sharpie. On the arms, I used mostly Sharpie, but the big blue sections I used duck tape for.
To assemble the arms to the body, I drilled holes through the vinyl and cardboard and attached the arms to the body with zip ties.
He did have some difficulties hearing with the big head, so I had to make sure I spoke loudly at him. He was quiet because his voice echoed inside.
His first costume appearance was a Cub Scout party. He was so covered, the other boys didn’t even know who it was! They were all touching the costume and oohing and ahhing. He won a prize there. I was asked if I could make an adult size for one of the parents for next year.
At the school costume party, even the other kids in costume were cheering for R2D2 to win. He did!
He won again at his bowling costume party!
We went to a town festival and complete strangers were gawking at him and asking him if they could take his picture. His sister was miserable because so many people were commenting on his awesome costume and no one told her that her princess was awesome or most original. She already told me I have to make her costume next year.
At one point, while Trick-or-Treating, one man drove by in his car. He apparently went home, got his wife and their bowl of candy, and went up streets until he found my grandson. He yelled at his wife “I told you there was an AWESOME R2D2 out here!!” She said, “ok, give him the candy and leave him alone!” Both of the kids scored big, because the man LOVED the R2D2.
Overall, HUGE success with lots of compliments and complete strangers taking pictures and stopping along the way to stare! Pretty easy to do, as long as you stay away from paper mache!!