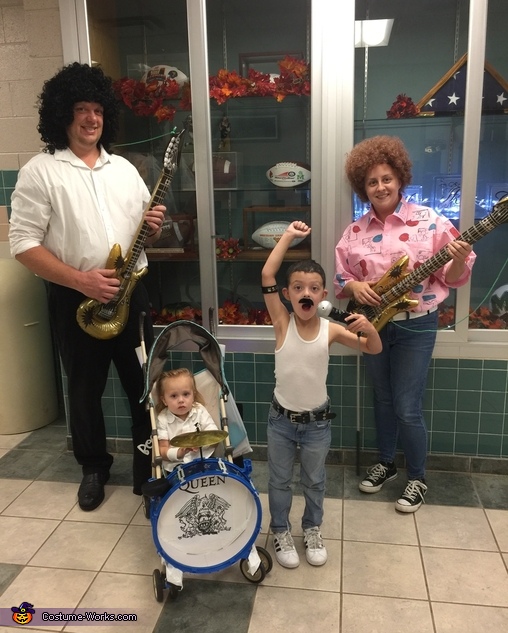 A word from Tracie, the 'Queen' costume creator:

Ever since my family and I watched Bohemian Rhapsody, we have been obsessed with Queen. My kids always want to listen to it in the car, so I just knew we had to transform into them for Halloween! I used their live aid performance for my inspiration. My son was Freddie Mercury. We just got some light washed jeans, a white tank top, studded belt and arm band, mustache, adidas, and black hair spray, and voila, he was Freddie. My daughter was Roger, the drummer. She just needed black pants, a white button up, and some white wrist bands which I made by cutting a tube sock. My husband was Brian May. I ordered a black curly wig and he just wore some black pants and white shirt that he already had. I was Deacon. I bought a plain pink shirt and drew the print on with sharpies and bought a brown Afro wig. We also used inflatable guitars and had a wireless speaker playing a Queen album! It was a huge hit with everyone. Several people even had to take photos of us!