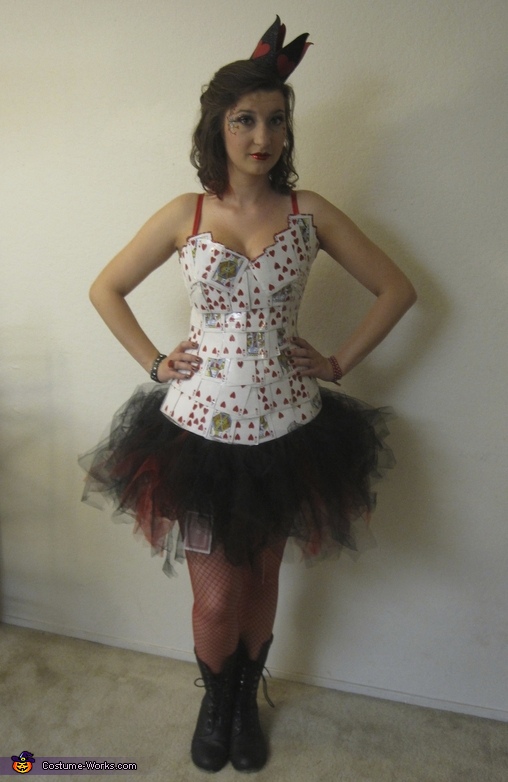 A word from Payton, the 'Queen of Hearts' costume creator:

My name is Payton, and I am a senior at Azusa Pacific University. This Halloween, I created a Queen of Hearts costume, and it was a huge hit!

Since this was our last Halloween in college before we all graduated and spread across the world, my friends and I wanted to make it a great one! My friend Amanda and I decided that we wanted to make our own costumes, because we wanted something creative that no one else would have! We wanted to do a group costume, so we originally thought of being Alice in Wonderland characters, and I wanted to be the Red Queen, but then the rest of our group bailed on the idea. Then the two of us thought about dressing up as playing cards, because we wanted to dress up together, so we began looking for ideas on how to make playing card costumes. It was a combination of the two ideas that brought the idea of dressing up as the Queen of Hearts and the Queen of Spades, and using playing cards to make our costumes!

To make the costume itself, I used playing cards, red and black tulle, black elastic, a white tank top, hot glue, red glitter, red ribbon, black tape, clear tape, a black headband, red scrapbook paper, and glittery foam! I used about 9 decks of cards, but since I only used one suit for the outfit, it came out to about 115 cards.

First, I put the white tank top on, and my friend helped me to hot glue cards to it. Before we glued the cards, we soaked them in a bowl of water to soften them and then allowed them to dry before gluing. We started at the bottom and worked our way up, gluing one layer at a time, all the way around, about 2/3 of the way up the tank top. Once we finished the bottom part, we began to fan the cards out to form the sweetheart-type neckline. On the back, we glued the cards face down.

Once the cards were all glued to the tank top, we put clear tape over the cards, cutting small pieces and taping along the edges of the cards in a horizontal direction so that they would not bend up as easily. Then, my friend cut in a straight vertical line directly up the middle of the back, and I carefully took it off so that the cards would not fall where they were cut at the back. I cut a small section out of the back, and then put the black tape along the edges of the cut on both sides. Then, I hole punched along the edges, and used red ribbon to lace up the back in a corset-style pattern. The entire process of the top took around three to four hours.

For the skirt, I used red and black tulle, which I cut into strips that were about 2-3 feet long. I used two strips of elastic, tied together at one place to go around my waist. On the top layer, I attached the strips of black tulle by folding each in half, looping it around the elastic, and pulling the ends through the loop. I did this all the way around the elastic, and then repeated the process with the red tulle on the bottom elastic. I then trimmed the stray pieces of tulle so that the red was barely peeking out from under the black, and then hole punched extra cards, tying them to random pieces of tulle so that they would hang from the skirt, almost reminiscent of a mobile that hangs over a baby's crib!

For the crown, I cut a crown shape out of black glittery foam, and stuck it together in a circle for the crown shape. I cut two slits in opposite sides of the crown and inserted the headband through, so that I could wear the headband to keep the crown on my head. As a final touch, I cut hearts out of the scrapbooking paper and glued them to the crown.

Once I finished the costume, I was so proud of it, and I could not wait to show it off to my friends and family! The reactions were priceless… everyone I ran into loved it, and no one could believe that I made it! The hours and hours of work were totally worth it!