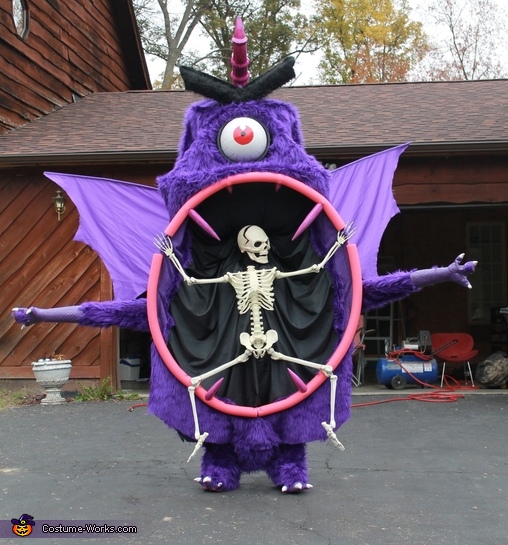 skeleton (my) head turned to show it moves

A word from Kenneth, the 'Purple People Eater' costume creator:

This idea came to me after building several stilted costumes, I decided to try un-stilted. I thought how about the one costume that has it's own song but rarely ever seen. The monster that started it all, a blast from the past, the one and only...1 eyed, 1 horned, flying purple people eater. So I listen to the song several times and followed the description within. The eye is a bi-axle globe with weights on it so it can move up/down and side to side and self center, giving it lots of action. The mouth is made of elastic tent poles and swimming noodles. The skeleton is a 5 foot life size prop that moves at every joint, with a matching custom mask.
I painted the skeleton white then repainted it with glow in the dark paint. The monster is made of pvc pipe and 20 yards of fur & silk, I sewed myself, something my now deceased grandma taught me, I even used the sewing machine she left to me. The monster is strapped to my back and my head functions as the skeletons head, making this costume a 2 in 1, or even a double costume if you will, I was going for an illusion which seems to have worked as peoples reactions were fantastic, many thought it was a 2 person costume, some thought I was the skeleton, others the monster, I would even accidently startle folks that were taking pics with it upon speaking to them when they were next to me, thinking the skeleton was merely a prop.
As my head makes up the skeletons head, my body is the monster, able to walk and move its arms.
A unique feature is that the monster and skeleton seem to move in opposite directions when frolicking about, it also has a blue tooth speaker mounted at the base of its horn so just as the song states "it plays rock-n-roll music from the horn on its head". The reactions to the "before" photos were as about the same as the after, being so much stuff, as you can see in the picture it takes up an entire pool table, lol. It encompassed many many parts and accessories, probably more than any other costume I have made/built. Total cost was around $1500.00