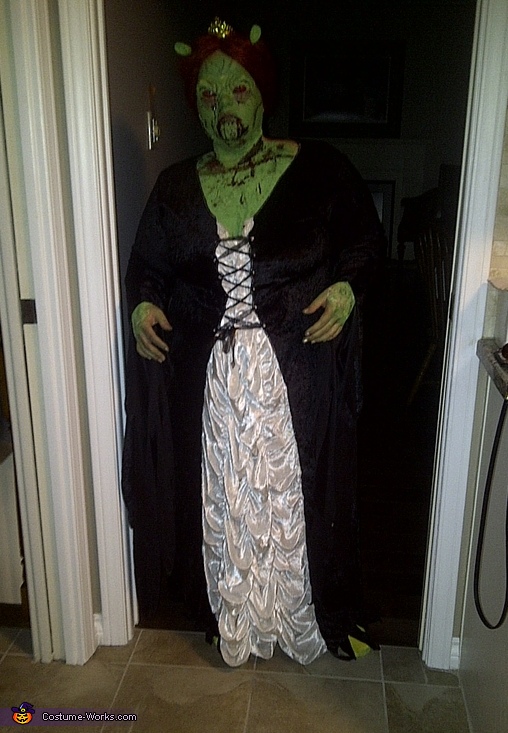 A word from Katie, the 'Princess Fiona Zombie' costume creator:

That's me in the picture; I swear I'm usually a really sweet girl.
For the last couple of years I wanted to be Princess Fiona as her ogre-self. I don't exactly have the body for the real Princess Fiona :P

A few weeks before Halloween I saw a preview for one of my favorite shows, The Walking Dead, I then had the instant idea to turn Fiona into a zombie. Then it allll started....
I looked up several "How to" videos to create different types of zombie skin and effects. But since no one has ever been a Princess-ogre-zombie-Fiona thing.. I had to come up with designs myself.

I had to experiment first so I started painting my arm with liquid latex and covering it in torn pieces of toilet paper - to create a rippled, old skin texture. Peeling that stuff off was torture. And that method didn't work out so well.
Tip: Shave any hair off first.

After several more videos and trials I discovered using a flat surface - like a mirror - was a very easy surface to build my fake skin on as well as to create the gashes and cuts.
Tip: Have baby powder standing by to set the latex.

Round 2, instead of using shredded toilet paper I painstakinly hand shredded little bits of party streamers. SO much better than toilet papper! I can thank the internet for that one, too.

After weeks of prep, trial and error, and a ton of anticipation Saturday night finally rolled around and it was time to put it all together. I'd never done this before I had no idea how it was going to turn out.

I used spirit gum to glue the pre-made fake skin (now painted green) to both arms. With more latex and green paint I made more skin on my hands that blended with the skin I attached to my arms. Seamless.. and Disgusting. I used some black and purple makeup to dirty my nails and grunge up my hands.
Tip: ALWAYS do a test spot on your inner arm with new products you've never used. I'll tell you why later.

I pre-made a skin piece for my chest as well, once that was spirit glued on I stuck on some bite marks and attached a couple of the homemade cuts and gashes.

Now my face prosthetic was a little different; I actually bought an "infected zombie kit" from spirithalloween.com that included an eye mask and a couple bite marks. The eye mask came with a strap that instantly broke while attempting to stretch it over my brain-filled skull. That's ok though - my spirit gum back-up plan was already in place. Once I put on my zombie eyes - which I also had to paint green - it was time to officially turn ogre and cover up the rest of my skin with green paint. I had my mom help me a little bit cause I couldn't see.

Here comes the FUN part - the fake blood. I got this super sticky realistic stuff from a local costume shop and it was made of corn syrup so it was edible and it had this awesome shiny look to it when it dried. I COVERED my mouth in the stuff and let it drip down my chest and face for a rather disgusting effect. After a few minutes my mouth cleared up from the stuff and I popped in my fake teeth. Ogre's don't have pearly whites ya know.

Turned to look at the mirror for a final glance at my efforts - AHH - I did scare myself a little bit.

After a wicked night of partying and scaring the sh~t out of unsuspecting strangers I had to take all this stuff off, might I add while completely intoxicated.
The arm and chest skin peeled off easily with a little help from scissors. Those damn bite marks and gashes though were awful to take off, they were stuck on like duct tape.

Oh no.. It had to happen at somepoint - this thing on my face has to come off... one.. two.. HOLY !@#$. That was terrible, I'm not even sure how I have any eyebrows left. There was green paint everywhere, fake blood stuck to everything and the soap I was using wasn't helping the situation it was pushing it around all over my face (Which gave me a new idea for next year - Roadkill Ogre zombie).

Let's quickly go back to that tip about testing something new on your skin, like liquid latex or spirit gum, for example. To my dismay I discovered I have an allergy to an ingredient in the spirit gum. My arms, chest and face were covered in a blotchy red rash that would not. stop. ITCHING! I was going insane. I'm alright now - my doctor gave me some roids and they've seemed to help the last 3 days.

What a crazy Halloween 2012.
Three weeks prep
3 hours getting ready
$30 on latex
$30 on prosthetics
$15 for the Fiona Wig
$40 on assorted make-up supplies
$10 to cure the riduclous itch
Causing some girl to pee herself: Priceless.

It was all worth it.