Rainbow and Pot of Gold
by Lori

Pot o' Gold at the End of the Rainbow Maternity Costume 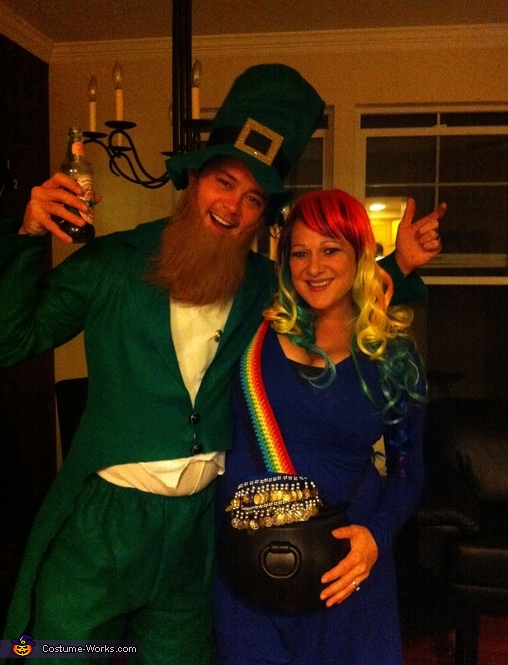 My best accessory, my leprechaun!

A word from Julie, the 'Pot o' Gold at the End of the Rainbow' costume creator:

In early September I was Googling maternity costumes without much luck. I saw plenty of zombie baby parts affixed to bloodied t-shirts and wasn't feeling it. There were also myriad pictures of women with their cute little bellies painted like the Earth or a basketball or a fishbowl, but these days I'm not really feeling like exposing my roundness, not to mention it's fricking cold outside!! As a first-time-mom I had no idea how big my belly would be in late October, so my costume had to evolve with me. I had seen a couple pictures online of girls dressed in black and they'd made their bellies look like a pot of gold, eh, cute idea but I wasn't impressed with their construction and all-out-balls-to-the-wall execution of the costume, so I created my own version. I asked my husband what he wanted to be for Halloween and he said he didn't care, so he became my accessory, a leprechaun it is! Since my belly did not "pop" enough by 22 weeks to decorate it AS the pot o'gold I improvised and created the pot. I found my costume very comfortable and loved that it can be worn pregnant or not.....Though as I am currently sinking so much money into my unborn son, a pot o' gold seemed quite appropriate for my baby's first costume. :)

EBay, Wal-Mart and Dollar Store made this costume happen!! From eBay I ordered a blue wrap maternity dress ($13). I went with dark blue for my "sky." The dress was not altered in any way, so I can wear it after Halloween passes, which is a plus! Then I ordered a belly dancing skirt ($8), also in dark blue. I wasn't quite sure what to do with this at first, but it had 248 gold coins attached, so I figured it had to be useful somehow! I also found the amazing rainbow wig on eBay and had it shipped from China ($19.50 with shipping!! 20% real human hair, excellent score!) The rainbow scarf ($25) was another fantastic eBay find, handmade and sold by a woman through her Etsy account. The belly dancing skirt and rainbow scarf were also not harmed in the making of this costume, so I now have an awesome skirt and scarf to wear around town! From Wal-Mart I was able to find a plastic black cauldron ($6) and some rainbow tights (for a clown) ($6). Then the crafty part began.....from the Dollar Store I grabbed some black elastic, a small foam football and some black felt ($3). At home I found some bamboo BBQ skewers and got out my hot glue gun.....then I made the magic happen.....

How you too can look like a pot o' gold for around $80!! Step 1: Bisect cauldron. I used scissors and a hot knife to painstakingly cut the cauldron in half....wasn't as easy as it looked! The plastic was thick and hard to get my scissors around the curve, but with the use of a lighter and a razor blade I made it through the hard parts. Then I used a knife and shaved a flat spot on one side of the football and hot glued it to the bottom of the cauldron. I took 5 skewers and poked them into the foam football and wrapped the belly dancing skirt around the skewers to give it enough height to get the coins exposed at the front of the cauldron. The skirt wrapped around the skewers a couple of times and I was able to just tuck in the ends of the skirt without cutting or gluing the fabric. Using the rectangle of black felt I hot glued it into the cauldron on the bottom half to hide the football and skewer "guts" of the pot, leaving the top half of the felt loose so I could tuck the end of my scarf into the cauldron behind the felt. I then took a nail and heated it up so I could poke holes on each side of the top of the cauldron. I took my $1 piece of elastic and wrapped it around the front of the cauldron under the lip, then through the holes and was able to comfortably tie the cauldron around my waist. Voila! Threw on my wig, tights, dress, boots and slung the scarf over one shoulder (I safety-pinned it to the dress on my shoulder) and tucked the end of the scarf into the cauldron inside the felt), tied on my pot o' gold and was ready to go!

People LOVED it!!! Since I'm not trying to pull off a super sexy Halloween costume this year with my increasing girth I was able to feel and look really cute and flaunt my expanding waistline rather than trying to hide it. Who doesn't love rainbows and gold, right? My costume was so well received I had people doing photo shoots of me while I was waiting in a bathroom line (awesome, right? lol). Also because of the plastic cauldron I also had a nice protective layer between my baby and wandering hands that seem to find it appropriate to grope a woman's belly just because she's pregnant! Add a leprechaun and you're good to go! And my husband loved being the protector of his gold! "They're stealin' me pot o' gold!!"