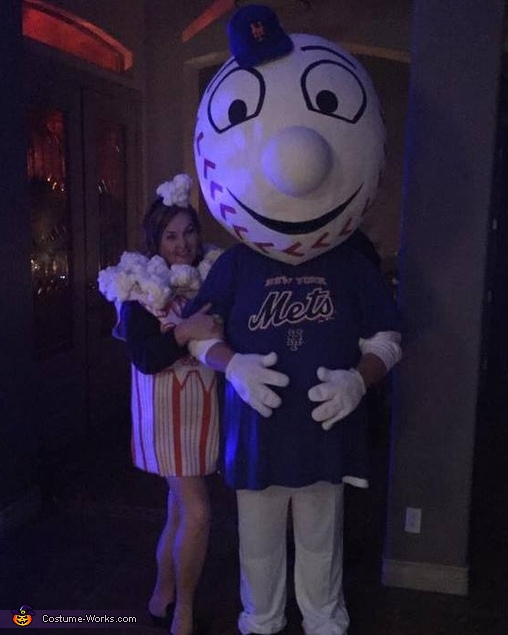 A word from Leslie, the 'Popcorn and Mr. Met Mascot' costume creator:

I have always had an obsession with Halloween for as far back as I can remember. This year we decided to host a Halloween Party at our house and knew we needed something epic since it was also a combined Birthday Party for me and my husband. We decided on the Mr. Met Mascot idea back in September and I started looking for ideas on how I could make the head portion of the costume. Since I always love making DIY Halloween costumes (last year I was Colonel Sanders in a bucket of chicken and a sushi roll the year before) I looked to the internet and several online images to see what I could come up with for inspiration. Unfortunately, there were not many tutorials for what I was looking for so I had to do some improvising and creating on my own. I knew we wanted a couples themed costume this year and thought that a bag of popcorn would be an ideal way to complement Mr. Met since they sell that at the baseball games too.

To begin constructing the Mr. Met Head, I used a large inflatable beach ball for the base. I then used paper mache to cover the whole ball with several layers. It is important to note that the newspaper strips should not be too big, as you want the layers to be strong. I cut them into approximately 2x3 inch strips. I layered the strips in different directions to provide maximum coverage and support. In total, I applied approximately 5 layers of paper mache. It took almost 30 hours to complete the head (not including painting) as you must let each layer completely dry before applying the next to avoid mold. Next, we sanded and painted the head to match the expression and face of Mr. Met and let it dry overnight. I then purchased some large white comic gloves and baseball pants online to complete the Mr. Met costume. For my Popcorn costume, I purchased the base of the costume and enhanced it with 3D kernels of popcorn. I used spray foam to make the popcorn pieces and shaped them into realistic forms. The spray foam is VERY sticky so be careful not to touch it until it is completely dry, approximated 6-8 hours. I attached the kernels to the costume with hot glue and made a matching head band as well.

We wore our DIY costumes this past Saturday at our Halloween Costume Party and they were an absolute hit and the talk of the party! We were beyond pleased with the way they came out and just how realistic they both looked, especially worn together. There is so much satisfaction in making your own DIY costume and then having them be so well received and loved by everyone too. We had so much fun wearing them that we plan on "sporting" them again tonight when we hand out the candy on Halloween.

It would be a phenomenal honor to be chosen as the winner of the 2016 DIY Costume Contest. Halloween is one of the greatest times of the year for us and I think it would be such fun to share our story on making our favorite DIY costumes this year.