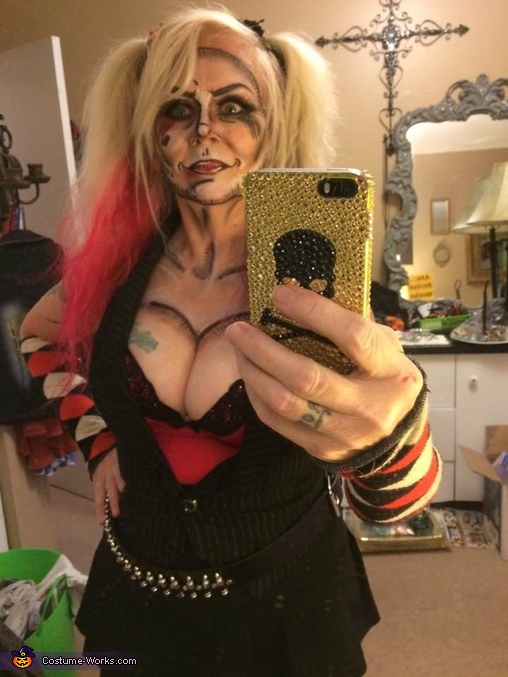 I was inspired by a Youtube video when I was looking for a makeup idea for Halloween! There were sooooo many for Harley Quinn & I wanted to do something different! The makeup was challenging & took me approximately 3 hours!I already had all the makeup that I used! The black 'comic' lines were made with a Sharpie marker! (and the tattoos on my legs) I was pleased with how it turned out & my friends said I 'did' look like a 'comic book character'! I found a red bustier, pleated skirt, vest, arm warmers, knee high sneakers, spiked bracelet & purse from my favorite second hand boutique! Score!!!! (approximate $15) I bought the fishnet stockings for $1.25 & the bullet belt for $12! I already owned the red & black cut-off fitness gloves! I had my hair ends done a soft pink, but did one side red....the other side I borrowed a black hair colour from a friend, but it turned purple! Ooooops....but it matched my friend, who was Ms. Joker! :) I made the 'Puddin' choker from ribbon & glued on ready-made cardboard letters from the $store!I transferred the script on the back of my vest & painted the lettering gold, glittered the letters & added gems! I borrowed a baseball bat, painted it & used stencils for the front & transfer script for the back! I drew on some lil' sayings & drawings....All in all I was very happy with the outcome & got many compliments! Hope you like my pop-art comic version of Harley Quinn! Thank you!