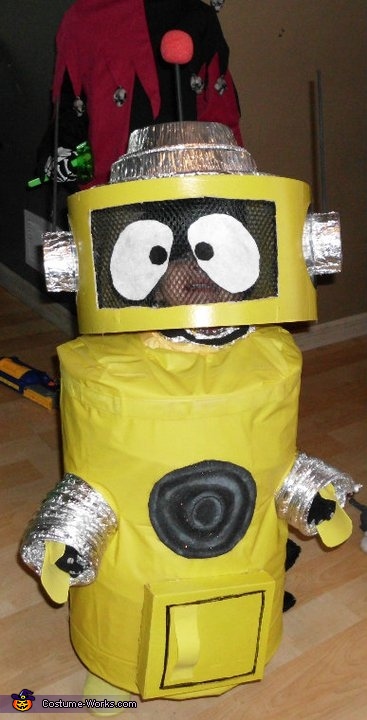 A word from Venessa, the 'Plex the Robot' costume creator:

My son, Nolan as "Plex" the magic robot from the popular Nick Jr show, Yo Gabba Gabba! He was not happy with the costume that was sold in stores as it was a hat you wear instead of a mask. He really wanted to "BE" Plex. So I opted to make my own! I used a pop up, circular laundry hamper for the body, and then wrapped it in a spray painted (yellow) shower curtain. The "speaker" is made from a painted piece of felt that I hot glued. The box is made from a box that I spray painted and hot glued to the front as well. The "head" is made from a hat box that I bought at a craft store (also spray painted). The eye area was made from a piece of the laundry hamper so that my child could see through it, but could almost not be seen from the outside. The eyes are felt and hot glued on. The sides and top for the head are made from aluminum pie tins and aluminum foil covered boxes that are also hot glued. The very top of his antenna is a clown nose. Most of the items I bought at the dollar store including the hamper, shower curtain, hot glue, tin foil and pie tins and clown nose. The boxes were recycled from the trash and the hat box and spray paint were from Hobby Lobby craft store. All in all, it probably cost about $35-$40 to make and the one at the store was $30. I really enjoyed making this costume because the one they sell at the store is NOTHING like the real thing. My son was beyond happy with the results and people have stopped us at the school Halloween party asking me where I got it and/or how I made it! I'm proud of how it came out and happy to make my child happy.