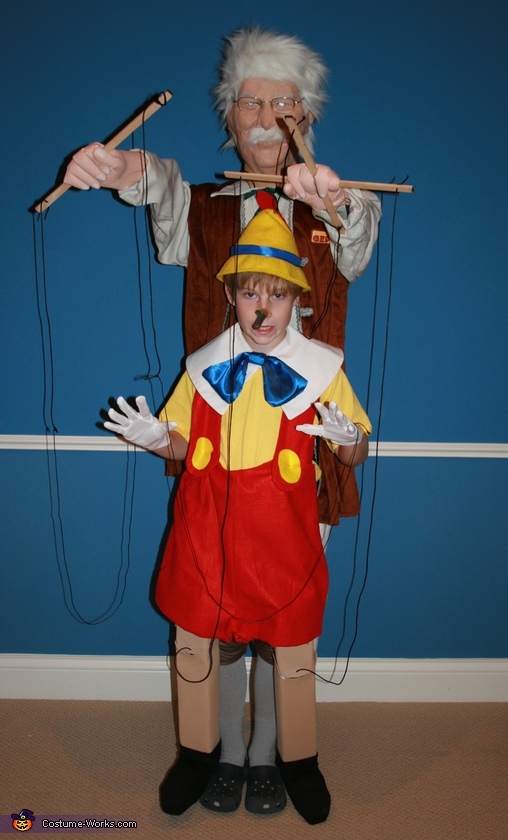 This homemade costume for boys entered our 2011 Halloween Costume Contest, in the Best Children's Costume nomination!

A word from Arlene, the 'Pinocchio and Gepetto' costume creator:

This is my 10 year old son wearing my homemade Pinocchio and Gepetto costume. I saw a similar costume online and asked him if he wanted to do that for Halloween. He was all for it.

Gepetto: His body was made from styrofoam packing material we had in boxes. I put a mask on a styrofoam wig holder/head with a wooden dowel holding it in place going into the styrofoam body. I added fun fur for the hair and mustache and the glasses were wired around the head under the fur to keep them on the mask. I added tape to the neck to help hold things together and give it a wrinkled look and painted it. I used wire (plant holders from hardware store), foam pipe insulation and lots of duct tape for the arms. His hands were rubber kitchen gloves from the dollar store painted flesh tone and stuffed. My daughter added the fingernails with nail polish. The fingers were wrapped around the dowels for Pinocchio's strings and glued in place with liquid nails. I purchased the Gepetto shirt from Good Will. The Gepetto body was put into a back pack my son was wearing and the straps were covered by the suspenders from Pinocchio's shorts. I had to do a little alterring of the pants I purchased at Goodwill for my son to wear as Gepetto's pants. My son is wearing really long soccer socks and his own shoes. I wrapped a white apron around the backpack and tied it around my son's waist to hold Gepetto in place and cover the backpack.

Pinocchio: The legs were styrofoam from packing material cut into strips and shaped then wrapped in foam. To get the hinged look at the knee, I used duct tape folded over on itself to make straps that I sandwiched between the upper and lower part of each leg. I did the same strapping idea to attach the legs to the inside of Pinocchio's shorts. Each foot is a piece of styrofoam attached to the leg, stuffed, and covered with a black sock. Pinocchio's shorts and collar were from the homemade costume I purchased on ebay. The suspenders are crossed behind my son's back to support the shorts and legs. I made Pinocchio's hat and bow tie from the pattern I received with the shorts purchased on ebay. Pinocchio's nose was made with liquid latex by my niece and attached with spirit gum. Her detail included a leaf. The yellow shirt was purchased at a hobby store. The gloves were attached to the strings with a safety pin hidden inside the gloves and a loop made in the string.

We made a few adjustments after the school parade and my son went trick or treating with the costume on without any help. The Gepetto body needed to be tied to my son to make it all feasible and the apron did that.