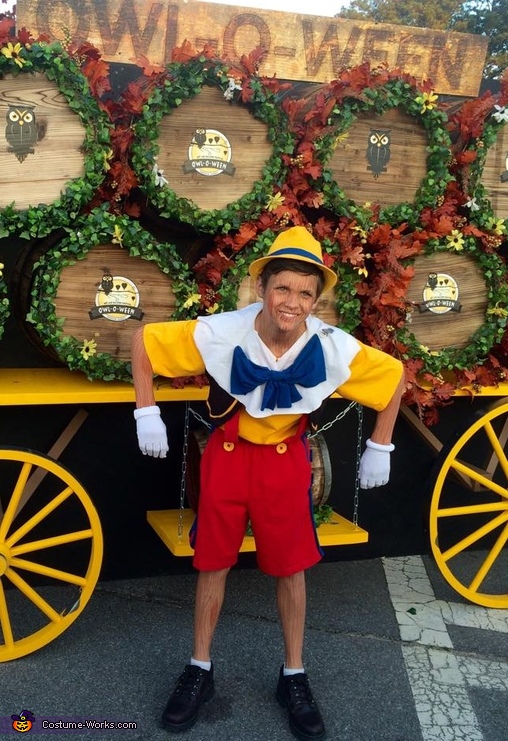 A word from Saleste, the 'Pinocchio' costume creator:

My brother, Stetson Malpass, who is 13 is wearing a Disney Pinocchio costume which I made almost completely from T-shirts and hot glue. The hat is a straw hat which I covered with the fabric of a yelp t-shirt. Also the wood pattern on his face, arms, and legs is hand drawn by me using washable marker. Although he has informed me that it is not so washable after all. Additionally, he has a small Jiminy Cricket that has been laminated and sits upon his shoulder via a small magnet attached to Jiminy and one underneath his shirt.

The idea arose from a little boy that I babysit who absolutely adores Disney's Pinocchio. I introduced him to the movie and I even read him the story book every night. It has become so routine that I have the character's details committed to memory. Hence the attention to detail exhibited vest's lining as well as the lining of the lederhosen. We even made a stop by Hudson's house. This four year old was simply amazed and even insisted that Stetson wasn't a real boy.

This sentiment was echoed when we attended a local fall festival. Stetson was stopped like a celebrity by adults, pointed at by fascinated small children, and he even had performers stop their shows to get THEIR picture taken with HIS! We had a great time enjoying the attention. In fact, the only thing we weren't able to accomplish was a growing nose. This being said, we figured it was best not to tell any lies while in character because, after all, a little boy who won't be good might as well be made of wood.