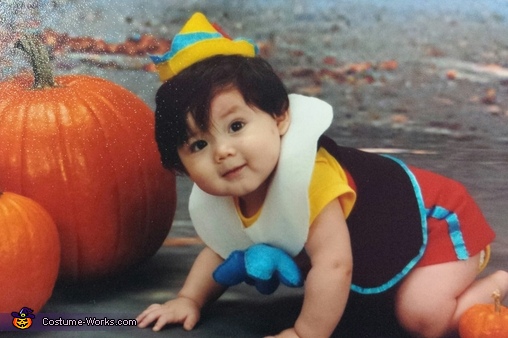 A word from Jazmin, the 'Pinocchio' costume creator:

My darling 7 month old boy is dressed for his first Halloween as Pinocchio, I got the idea simply because, he has a lot oh hair and would fit perfectly for the part! His costume is all hand made. His yellow hat is made out of felt as well as the little red feather on the hat and with a satin blue ribbon around it and an elastic band to keep it in place. His vest is made out of two pieces of black felt and satin blue ribbon sewn around the edge. His high waist shorts are also made out of two pieces of red felt and add buttons to close them once put on and two large buttons just for show. He also has a little white collar with a stuffed blue bow that was also hand sewn and lastly a all yellow onies under the whole costume!