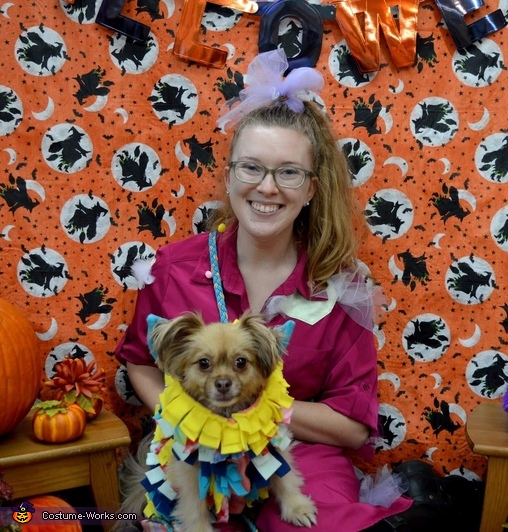 Me and Tiny at a Halloween party in Roswell, GA

A word from Emily, the 'Piñata and Candy' costume creator:

Tiny is a little dog, but brings a lot to the table, which is why he is a perfect 11 lb piñata!

I adopted Tiny from a rescue during the summer of 2017. He is my first pet, and we had so much fun with the Halloween costumes I made last year. Three other friends and I dressed up as the Teletubbies, and Tiny was the baby sun. I loved making the costumes! This year, all my friends and I moved to different states for internships, so I really had to think of a good costume idea for just me and Tiny as a pair.

I put a lot of thought into it, and decided it would be hilariously cute if Tiny dressed as a piñata, and I was the candy from it. Little dude, lots in store, remember? Basically, Tiny would be the star, and I would be his accessory this Halloween. I got the idea after scouring some ideas on the internet. Runner-up ideas included me being Colonel Sanders and being a nugget in a bucket, my being Uncle Rich Penny Moneybags and Tiny being a bag of money, and me being a guitar and Tiny being the pick. Ideas for next year!

Tiny loves clothes, sweaters, anything soft and warm that gives him the cuddles and attention he rightfully deserves (at least, that's what he thinks). If I bring home a new piece of clothing for him, he jumps up and down and gets so excited! I wanted something soft and comfy for him, which is why I went with fleece. I took his winter coat, traced it on some fabric, and after I cut it out, I sewed the little strips on. After that, I sewed Velcro from the collar to the belly (the whole front of the costume opens up like a jacket or button up shirt). To make the ears, I used fleece and pillow piping (left over from when I made his baby sun costume). I giggled so much while making his costume, and putting it on him throughout the process. Imagine the bunny pajamas scene from a Christmas story. He looked so done with me, and drowning in a gaudy heap of colors!

My candy costume started from a dress I picked out at goodwill. Then I created geometric shapes out of fabric around the house, and tulle, to look like candy (saltwater tardy vibes). I added some pom poms that my mom found in the garage, and put some tulle in my hair. Not pictured, but for added effect, I had a mini Louisville Sluggers baseball bat.

Overall, the reactions were positive! My costume doesn't make sense, though, without Tiny. I'm a music therapy intern in a school system, and mainly work in special education classrooms. Some of the student guesses of my costume included ballerina, princess, maid, but once I showed them some pictures of Tiny, they got it! One of my middle schoolers said, "you're really weird!" But hey, she's not wrong... After all, I am currently writing an essay about a costume for my dog...

We didn't get to do much with contests this year, because first year in a school system means I am already really sick. But, I bounced back in time for a recent dog costume contest and Halloween party, and we won the four legged and two legged pair category. The judges didn't know what to call my part of the costume when Tiny won 😂 I think next year I will try to make my part of the costume more obvious, but it made for some good conversation! I'm excited for more costume creating in the future!