Phantom of the Opera Costume 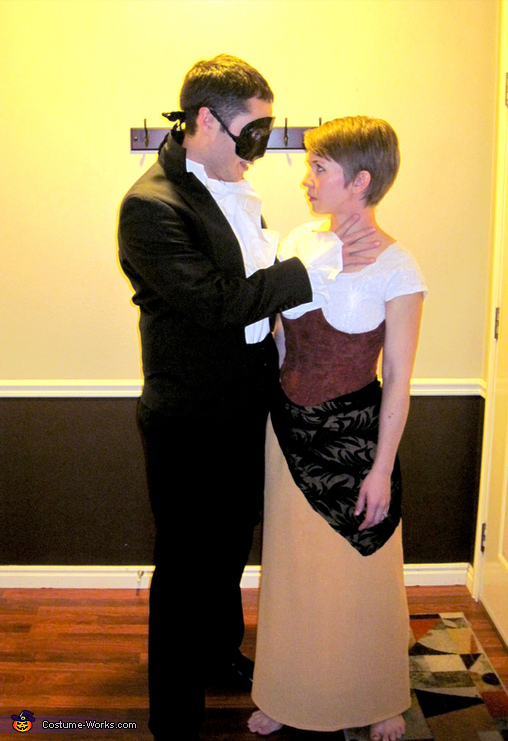 The lot of us together

A word from Sunni, the 'Phantom of the Opera' costume creator:

My husband and I have been wanting to dress up as Phantom of the Opera for some time, and this year was finally it! We dressed up from the scene Don Juan Triumphant, where the phantom wears a full black mask as opposed to the usual half white mask. His shirt is made from Simplicity pattern 3748 (https://www.simplicity.com/p-2001-misses-men-teen-costumes.aspx) and I modified the jacket to allow more of the shirt to show through, as the phantom's real costume was from the movie. Mask is custom made with paper mache.

I dressed as Christine Daae from the same scene. My costume is 100% made from scratch. The white shirt I based a pattern from on a shirt I already owned. I tried to make it as close to the original as possible (while still retaining modesty). The corset is from pattern Simplicity 1819 (https://www.simplicity.com/p-7517-misses-steampunk-costume.aspx), boning included. The black sash is a triangle cut out of black lace fabric I already had on stash, and the skirt is made using this tutorial: https://www.tashadelrae.com/2010/09/slinky-maxi-skirt-diy.html.

My son is dressed as the monkey on the music box. We were never able to find any cymbals, but his costume is complete besides that. I made the hat and some aladdin-style pants for him, but it turned out that with the pants he just looked like a really fat boy, and you couldn't tell he was a monkey, so we left that part out. Vest and monkey outfit were found at thrift stores.

That's it! We absolutely love our costumes for this year, and as they took over two months to put together, I'm sure glad we do!