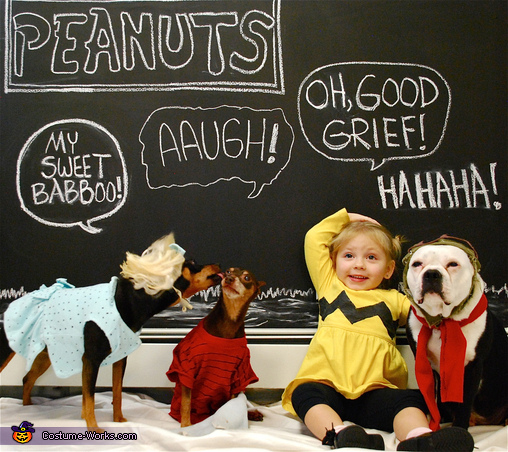 A word from Jennifer, the 'Peanuts Charlie Brown and Friends' costume creator:

My three dogs, Caiden, as Linus, Callie as Sally and Caillou as snoopy, as well as my daughter Alyvia dressed as Charlie Brown, are wearing these Peanuts comic strip inspired costumes. I chose these costumes because I absolutely LOVE that comic! It's a classic known by all and I just had to design these costumes for my three fur-children and my daughter!

Linus: I bought a red (infant) t-shirt , a pair of black pants and a small blue blanket. I used fabric paint to make the stripes on the shirt and I sewed the blue blanket to the side of the pants.

Snoopy: I used an old red scarf and found a pattern for an aviator hat online. I used army green fabric to make the hat and then used felt to make the googles.

Sally: I used a dog-dress pattern to design the dress. I used a light blue fabric for the dress and bow and black fabric paint to make the dots. For the wig, I bought a blonde dog wig and cut and styled it (with elmers glue) to give it the "sally look".

Charlie Brown: I bought a solid yellow dress (you can use a t-shirt for boys) and drew the zig zag pattern on it. Then I used black fabric paint and painted the dress. Black pants and shoes to complete the look!

Then, for fun, I sat them all by a chalk board (chalk board paint on our playroom wall) and drew the comic strip behind them. I made sure they all said the traditional things that the characters say a lot! It was a lot of fun doing!