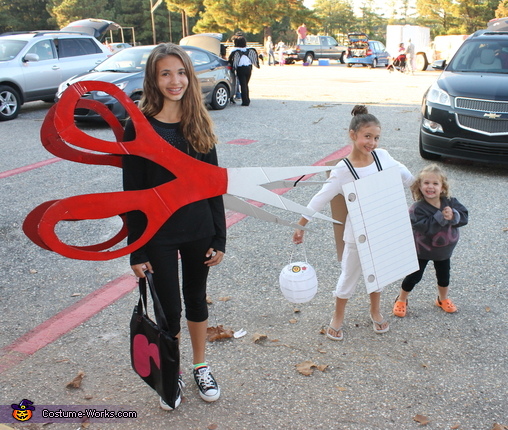 A word from Tanya, the 'Paper, Rock, Scissors' costume creator:

These are my girls: Reese, Ivey and Venna. Reese was the scissors, Ivey was the paper and Venna was the rock. My husband cut out a shadow of a pair of scissors onto cardboard, cut out and reinforced the blades a bit with extra cardboard, spray painted and hot glued straps for the scissors. For the paper, he cut out a rectangle, cut out three circles, spray painted white and drew the lines on. For the rock, we bought a grey sweatsuit and stuffed with pillow stuffing. We sprayed the word ROCK onto her shirt. It didn't really cost us anything, because we already had the supplies we needed, except the grey sweatsuit, which was under $5. I came across the idea on pinterest and put into action!!! It was super fun and we received TONS of compliments, stares and laughs.