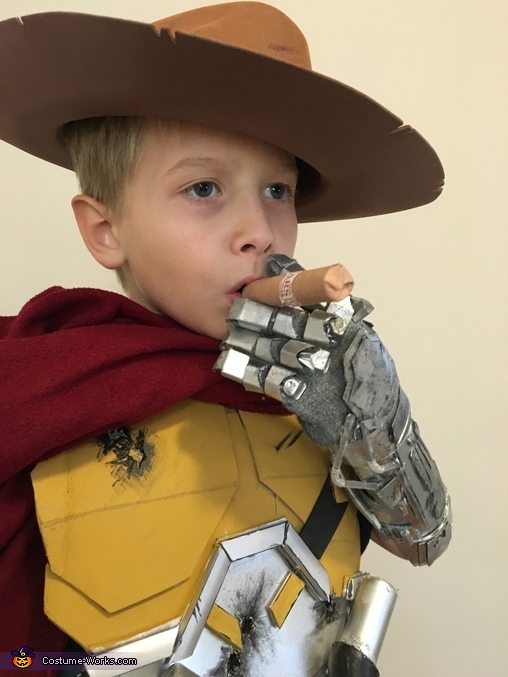 A word from Tyler, the 'Overwatch McCree' costume creator:

This costume is based off of the character McCree from the popular video game Overwatch. This costume is nearly 100% homemade, except for the hat and the chest plate which were purchased but heavily modified. The rest of the costume is made mostly from craft foam, cardboard, PVC pipe, hot glue, and miscellaneous small parts found around the house. The parts were pained with spray paint then the details were added on with acrylic paints. This costume was constructed by myself and my friend Matt, we are 16, and it was made for my brother Austin who is 6. It really just started out as a fun weekend project, because like to make props and such for films we try to make. One day while playing Overwatch we were like "Hey, wouldn't it be cool to make a costume of McCree? It can't be that hard and it would look awesome." We originally had no intent to use it for Halloween, but once it started to take shape we thought it would be the perfect Halloween costume for my brother. We spent about a month working on it on weekends when we were out of school, but once it got closer to Halloween we really started working on the finishing details. One of the first things we made was the gun, McCree's Peacekeeper revolver, which in my opinion is one of the coolest parts. It was made from some foam core as the base covered by thin craft foam, and some PVC for the barrel. We used an old yarn spool and a pencil stuck into the foam core to create the cylinder which actually spins. Next we made the robotic arm, which was just an old glove and a cardboard tube that we built off of to create all of the electronic parts. I happened to see a foam cowboy hat at the dollar store which I picked up, and we added a rim made from craft foam then some pen caps around it painted to look like bullets. We then moved on to the flashbangs which were simply some PVC with end caps that we screwed hooks into to attach to the belt. The two belts were next, we added a section with three screw eye bolts to hold the flashbangs in the back. The belt also has a knife holster and a small plate with six bullets (unfortunately Austin managed to loose all 6 before we could get a good picture :/). The second belt above that we made to have a place to latch on a simple holster for the gun that would strap around his leg as well. That belt also held the giant golden "BAMF" buckle (which Austin also managed to lose...) and rests right below the chestplate. We purchased a basic knight's chest plate and removed the dragon emblem from the front. The only problem was that it left some very noticeable holes in it, but Matt had the idea to turn them into bullet holes. Once we made the top portion of the chestplate and added the tubing to both sides, he dug out some of the craft foam at the top and scratched up the other visible holes to give the bullet hole effect. This was further emphasized with weathering effects of the paint. most of he chest plate was hand painted with the acrylic paint, while the base was coated in a silver spray paint. The last part was the scarf/cape worn around his neck, for which we cut a hole in a red blanket and pinned it in the right places to give it the effect we wanted. We got him to wear some khaki pants and a black shirt to tie it all together, and he was ready for Halloween! He wore it to a Halloween party a couple days before, and I got lots of compliments from parents on how neat it was, and many were shocked that it was merely made from foam core among other things. It turned out far better than we had expected and it was so much fun to make.