Oscar the Grouch and Friends Costume 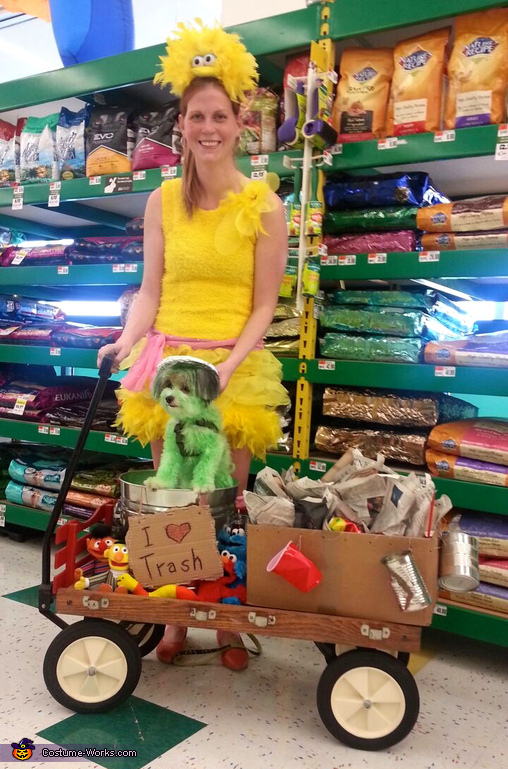 Oscar the Grouch and Friends

A word from Jessyca, the 'Oscar the Grouch and Friends' costume creator:

I do a lot of crafting, so the idea for this costume came from a mishap when I was making some decorations about a month or so before Halloween. I had left something that I had painted green on the floor on some newspaper, and turned my back for a few seconds to rinse the brushes when my dog decided he was going to rub his face on my craft project. He had green paint all over himself! As I tried to clean him up, I realized his resemblance to Oscar the Grouch. So that is how the our Sesame Street theme idea was born for the costume contest we entered this year.

I tried many different ways of making my dog green before the contest. I have a Bachelor’s degree in animal science, so I know that a few ways (such as Kool-aid) should not be used because they can be dangerous to the pet’s skin and health. Even “non-toxic” pet dyes can be dangerous because you cannot let your pet lick the dye while it is on your pet, and my dog has to taste everything! I tried spinach as an all-natural method, and I didn’t have a guide to go by for dogs so I tweaked one for dying cloth all naturally. First, I added some water to baby spinach and put it in the blender until I had a finely pureed mixture. I then simmered the mixture for an hour to bring the color out into the liquid. I then let the mixture sit overnight to allow the color to become even darker. After sitting, I strained out the solids. The remaining liquid would go into a spray bottle. I warmed it up in the microwave some since it had to sit on my dog for a while, I didn’t want him to be cold. After spraying it on my dog and combing it through his hair, I let it sit for ten to fifteen minutes. I then rinsed with only water and blow-dried his hair. For his costume, I obtained a small trashcan from the hardware store for him to sit in and placed a blanket in the bottom for comfort. I took a cardboard box and tore a rectangle from it. I used crayon to write “I *heart* Trash”, used a single hole punch to punch holes in the top corners, attached jute to each corner and hung the sign from the can. I made a small trash can lid for my dog’s head by using a lid from a tub of butter, bubble wrap and tin foil. I cut several circles out of the bubble wrap the same size as the butter lid to make the trash can lid thicker. I then put a few pieces of bubble wrap on each side of the butter lid and wrapped the entire thing in tin foil. I used hot glue to secure the foil. I took a small piece of foil to make a handle for the lid and hot glued that to the trash can lid as well. I then took green, one inch wide elastic and hot glued it to the bottom of the trashcan lid to create a loop that would go under my dog’s chin to secure the lid to his head. Oscar the Grouch never goes anywhere without his best friend, Wormy. So I took yellow and orange felt and sewed Wormy, and used black puffy fabric paint to make his face. Oscar’s next favorite thing is trash. I took a cardboard box and drilled small holes around the front and two sides. Though it is difficult to see in the picture, I took wire and looped it through these holes around the box. I then took some soup cans and a cup and drilled two holes in each. I took a hammer and dented some of the soup cans to add wear. I took wire and fed it through the holes I drilled in the cans and cup and the wired them to the box using the holes that had already been drilled for the looped wire. The inside of the box was stuffed with newspaper as well as more trash including soup cans, pop cans, etc. Oscar’s Sesame Street friends including Bird Bird, Burt, Ernie, Elmo and the Cookie Monster came with, too! I dressed up as Big Bird. Though my costume was purchased, I did many alterations to it. It was quite short and I couldn’t understand how a Big Bird costume didn’t have any feathers on it! Therefore, I sewed a yellow boa to the bottom of the dress. I also added feathers to the broach and the headpiece. Originally, the headpiece was quite small and unassuming, but it became about three times as large and much more dramatic after I added feathers to it. I then found Burt, Ernie, Elmo and Cookie Monster plush dolls to add. Lastly, I pulled everything on my Berlin Flyer red wagon that I received from Santa Claus when I was five years old.

Everyone loved our costumes! As soon as we walked in everyone was taking our photo.