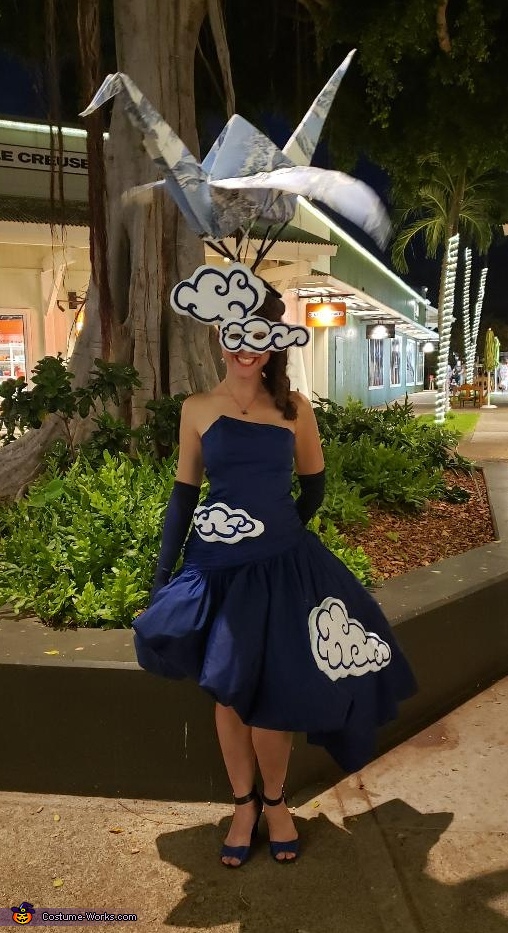 A word from Denise, the 'Origami Paper Crane' costume creator:

The idea for this costume was to make an origami paper crane that flapped its wings and appeared to have picked me up as it drifted through a blue sky with puffy, traditional block print style clouds. As though, after folding such a humongous paper crane it came to life and carried me away.

I had wanted to create a paper crane costume for the last several years. I was one of those kids who folded paper cranes out of anything I could get my hands on and reaching back to that memory gave me a nostalgic joy. I always look for whimsical ideas for my annual no-budget art project and this year, short on time and in an effort to make a less elaborate costume than in previous years, I decided to tackle the concept. Instead of beginning to brainstorm and search for materials in the summer like I usually do, I started in October!

The look of the actual “origami paper” was most important so I searched local fabric stores until I found this copy of the famous block print “The Wave”, by the artist Hokusai, which happens to be printed in Japan. I folded several test run cranes out of sheets of newspaper taped together until I determined the perfect size for a huge crane that would still fit through doors one worn on my head. The wingspan is 3.5 feet from tip to tip. I sewed a 59” square and folded the crane, ironing at each fold. I used stiff felt interfacing cut to shape and used hot iron to fix that inside of the crane. I built an armature out of bamboo garden stakes and stainless steel wire, and created a simple pulley system inside that made the wings flap when I pulled on a satin cord. I painted the whole crane with varnish to make it look more like the texture of paper and add an extra support of stiffness.

Making the part that supported it on my head was perhaps the most difficult. I took inspiration from the shape used for can-can girls headdresses and made my own out of wire, foam insulation to soften the weight, and electrical tape. (Most of my costumes rely on hardware store supplies.)

I wanted the Japanese theme to be evident, but did not want it to be a caricature of a culture.
The traditional Japanese indigo color, which I learned is called “aizome”, was an inspiration but is hard to do without actual aizome dye from Japan, so I had to settle for what I could create.

I sewed the clouds, and mask, and hand painted the block print style brush strokes on them, and pinned them to my dress. The dress is from a local theater costume sale on which I used foam pipe insulation, stiffened felt, and tulle netting to give the dress body and look as though it had been picked up by a gust of wind. Add some old white opera gloves dyed cobalt, some cobalt and black heels I already owned, and I was good to go. I wore it to a huge Halloween town party and enjoyed posing for pictures as strangers approached and flapping its wings as we glided through the streets.