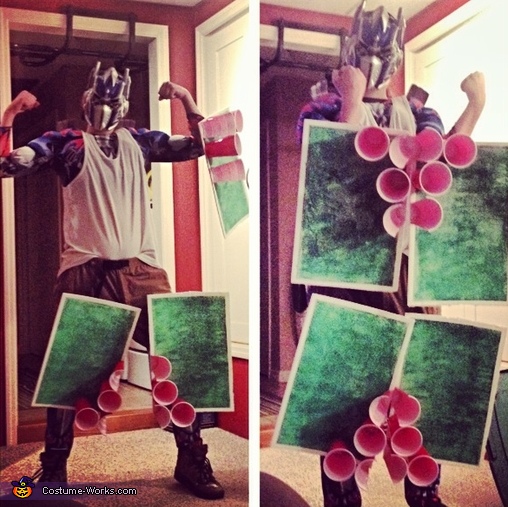 A word from Victoria, the 'Optimus Bro' costume creator:

I'm a college student in a sorority, so every weekend I'm surrounded by frat culture. They spring out the beer pong tables like it's their job, you know, automatically, some might say robotically. I've also always been a fan of the Transformers movie, so I thought it would be fun to see what Optimus prime would look like if he was in college like me. Trying to impress friends, serving a great and noble purpose of inebriating college kids with a thinly veiled excuse that with the euphemismal game called "Beer Pong". Thus Optimus Bro was born, in all his Mechanical Glory.

Once I thought of the concept, it was time to draw up a design and proceed with the plan. The only optimus prime costume left in the store was a childs costume, so I had to make some alterations for fitting purposes. I wore a backwards cap, men's khakis, men's hiking boots, men's high socks, and white wife beater. The hardest part was the thinking of the design of the pong table so that it could be stable, maintain mobility, and carry across the message. I got a white science poster board and cut it into 4 rectangles. I painted the insides of the rectangles green using a sponge so I could get that "gravelly effect". Next I taped the red solo cups to the board. I had to cut the cups that were in the midline of the 'pong table' so that I could keep my arms separated. Lastly I made Duct tape bands to go across my upper thigh and lower forarm for the table to be connected to my limbs.

Overall the costume cost around 35$. The most expensive part was the Optimus Prime costume which was 20$.

When I got to the Halloween party, I immediately was greeted with hugs from guys and girls who grew up with the Transformers Saturday morning cartoons. One person thought I was some sort of power ranger which I thought was funny. A lot of people thought it was hilarious. I also got a lot of requests to dance the Robot!