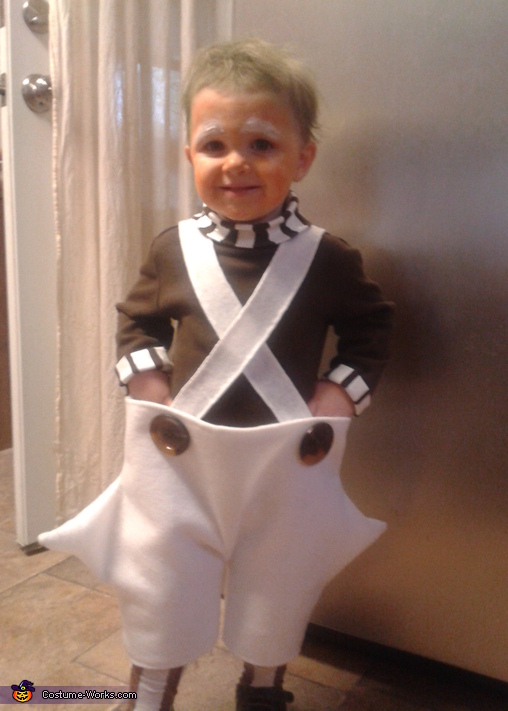 A word from Cristina, the 'Oompa Loompa' costume creator:

My 2 year old daughter Gabriella is wearing this homemade costume. I figured she wouldn't let me pick next year so for this year I took control! She has hardly any hair so she looks like a little boy...I should have put what little hair she has in pigtails. I bought the supplies at Michaels, JoAnn crafts. I used the thickest felt I could find. All I did was lay her on the floor and draw the pattern for her size. I failed on my first attempt, not allowing for the width of her body. LOL I don't sew in anyway shape or form. I cut the same pattern 4 times. So front and back are double (one layer was see thru) I bought the biggest buttons I could find, these were the most expensive (3.99 each) I needed thread and a needle, i only needed white and brown for the buttons. I hand stiched the best I know how along the edges. I cut a slit in the middle to make the legs and stiched all that also. I than flipped the shorts inside out so you didn't see the seem. I attached the button to one end of the strap so it was on permanently.i cut a slit in the back for the other button and reinforced that cut with a few stiches so the button could fit threw the hole. I sewed the other two buttons on the front directly onto the shorts with the strap also, i didn't make a slit for them. That was it for the shorts! I took a pair of tights and used brown electrical tape to create the lines on her legs, it kept not sticking so i wrapped electrical tape around her leg over the lines to keep them from falling off. worked perfect and was covered by the shorts. i bought a brown turtle neck from a consignment shop (could only find solid brown in the boys section) and used white electrical tape on the sleeves and collar. my son had a perfect pair of brown sneakers that he grew out of. i wanted to put a yarn ball on top of the sneaker (white and brown) but ran out of time. if you watch the movie, they have a ball on top of there shoe. After I put the costume on, the straps kept falling down so i pinned them to her shift under the color. Than i used face paint that i got in the halloween section at michaels to put orange on her face and white on her eyebrows. i got green neon hair coloring spray also. That was it! Took a week to make on my time, could have done it probably 2 days. the only thing to be careful of is sitting. the staps pull when they sit, but otherwise it held up great!