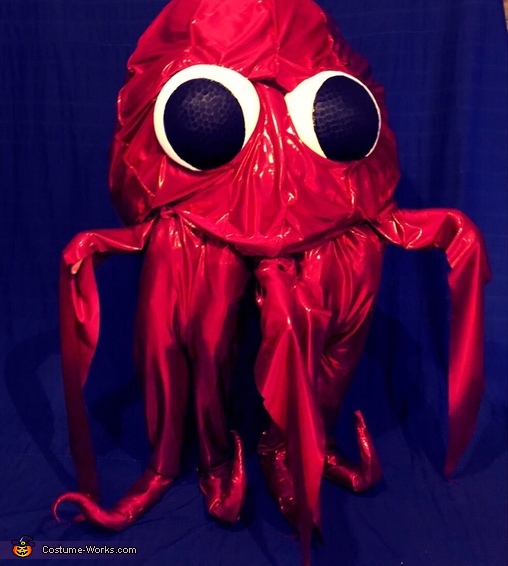 This homemade costume for kids entered our 2018 Halloween Costume Contest.

A word from Andrea, the 'Octopus Twins' costume creator:

What a fun contest! This entry is for my twin 5 year olds' cartoon octopus costume. Since they were born I have tried to come up with costumes that only two little people of the same size can pull off. My parents always made my three brothers' and my costumes growing up, so buying costumes just feels like cheating... that and we are very competitive, haha! In fact, when I told my youngest brother that I was going to have the twins go as Brother and Sister Bernstein bears, he was so disappointed in me that I laid awake half that night trying to come up with something to top the two-headed dragon I made them last year.

I modified an inflatable Star Wars costume, covered it with silky, shiny red material, made eyes using hollow styrofoam halves to make see-through masks for each child, made their bodies & legs look like octopus arms by modifying footed pajamas and attached wire to shoes to form the twisted tips.

Throughout the weeks making this, my dad had the The Beatles’ Octopus’s Garden playing on repeat while my mom was not only patient with the sprawl of materials taking over her home, but helped me sew without sewing by pulling out a package of magic fusion from the seventies! After much trial and error and 50 glue sticks later, it was finally complete. Although they were a little exasperated with all of the steps needed to get the thing on, my twins exclaimed “We look like a real octopus, momma!” and had fun waving the arms, dancing and singing, “I’d like to be under the sea, in an octopus' garden with you!”

The best part is sending the pictures to my brothers and asking what their kids were for Halloween this year?! hehe