Statue of Liberty with Fireworks
by Katie

Statue of Liberty
by Suzanne

Statue of Liberty
by Kristin 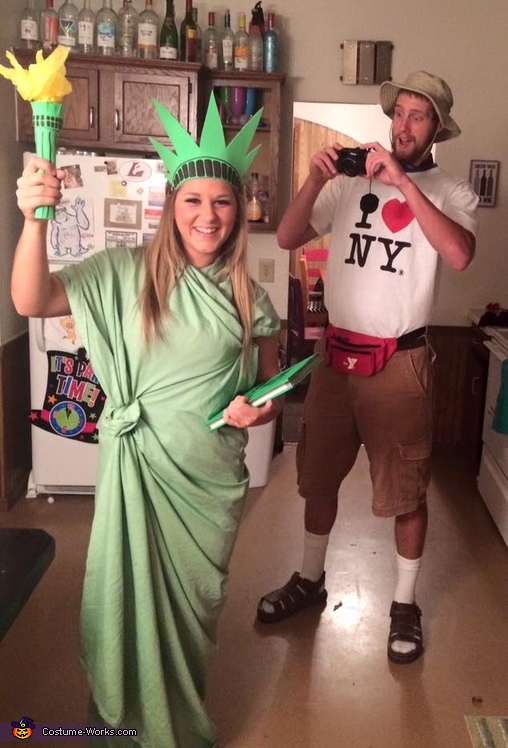 A word from McKenna, the 'NYC Tourist and Statue of Liberty' costume creator:

We came up with the idea after a recent trip to Hawai'i. While there, my boyfriend (Brett) wore his Hawai'ian shirt and I called him "such a tourist". That's when our original idea came to be a Hawai'ian tourist and have me dressing in a hula skirt...then we thought about the fact that we would be in Wisconsin and decided to try something warmer. So, NYC it was (because it was the most cliche tourist shirt and everyone loves NY!). His outfit was pretty easy. He brought a hat, camera, shorts, socks, and sandals from home. From there, I bought a plain white tshirt from Michael's, some fabric paint, and painted on the "I heart NY". I found the fanny pack at work and called it finished. The total cost of his outfit was about 8$. My costume involved a plain white sheet from Wal-Mart (4$), some green dye (3$), some foam paper (2$) and a sheet of green paper (1$). I cut out the crown from the foam paper and drew sharpie on for the design. I then took the remaining foam paper and put it around a flash light and added tissue paper for the top for the torch. For the book, I took an old one from home and covered it was green paper. I then took the sheet and dyed it to make my actual outfit. It was super simple and super cheap, and everyone loved it!